Looking back to this time last year, I was in the middle of launching my celebrity chef novel ‘Reaching for the Stars’ and hosting the ‘Wish I Was Here’ Blog Party before revelling in the champagne soaked aftermath. What fabulous fun that was!


This year December has been a far more sedate in comparison, which has put me in something of a reflective mood. So I thought this final blog post of 2012 should take a look back over my blogging year.
During the early part of 2012, here at JH HQ we explored many writerly themes – like naming characters and selecting settings, to choosing book titles and ‘Arresting Your Reader’. You can click on the text I’ve highlighted to link and rediscover those oh-so-interesting posts!
In March, my birthday month, we explored castles together and also celebrated my blogiversary – my gift that day was seeing ‘Reaching for the Stars’ at Number Two in the paid Top 100 Amazon Bestseller Chart for Women’s Fiction!


A highlight of the Summer for me was being asked to speak at the loveahappyending.com Summer Audience, a reader/writer event that took place in the lovely Cotswold town of Tetbury in Gloucestershire. This was the first time I’d ever done a public speaking event and I was a wee bit nervous as I flew down from Scotland to Bristol. I stayed with Linn B.Halton author and founder of loveahappyending.com over the weekend and Linn and I (who first met on Twitter) met for 'real'! I had the most fabulous time. The event was a great success and Linn, as well as all the other authors I met for the first time at the Summer Event, were all lovely.


Another highlight of the summer came just one week later, when I was asked to speak to writers at the Creative Arts Business Network Conference (CABN) at the Urr Valley Hotel in Castle Douglas, Dumfries and Galloway. My talk was on independent epublishing, not the nuts and bolts of how to do it, but rather how to go about promoting your book once it’s up there on Amazon. The key speaker of the day was award winning author Nicola Morgan (or The Crabbit Old Bat, as those on the blogisphere and Twitter know her best!) It was a fabulous and inspiring day and, once I got over my initial nerves, I really enjoyed it.

Then back on the blog we looked at ereaders vs paperbooks and discussed marketing ‘tags’ – the ones we authors use to identify our ‘brand’ – so that readers know what to expect from us and more importantly from our books. From this I settled on ‘Scottish Fiction with Humour and Heart’ as my own tag.
This topic was followed up with a light hearted look at Men in Kilts which was one of the most popular posts of the year – so I had to mention it!
Then in July, I posted a roundup of The Romantic Novelist’s Conference that I attended in Penrith Cumbria. This was such a fab weekend. Friday to Sunday I got to catch up with friends, meet the lovely virtual peeps that I knew from Facebook and Twitter and Blogland in real life, and forge new friendships. On top of that of course was the business of writing and I was interviewed by BBC Radio Cumbria while on site – discussing romantic fiction, of course!
August is the month that hosts the Edinburgh Book Festival and this year saw the inaugural Edinburgh Ebook Festival, to which I was delighted to be invited to take part. You can find out more about this fabulous online event from my blog post here.
In September I put work on my next full length novel aside to began working on a novella entitled How Do You Voodoo? which I planned to launch in time for Halloween. This is a romantic and humorous story about a loveless fashion model Nola Nichols, who thinks being beautiful is a curse; that is until she is cursed and her looks begin to fade just a week before the most important photo shoot of her career.
One of the central scenes in How Do You Voodoo? takes place in a graveyard in Glasgow – the Glasgow Necropolis or City of the Dead as it is known - hence my idea to launch at Halloween although the story can be enjoyed at any time of the year! ‘How Do You Voodoo’ has been very well received and reviewed and will be followed up on Valentine’s Day 2013 with its novella length sequel ‘Voodoo Wedding’ and later in the year ‘Voodoo Child’.
The research I did in Glasgow’s City of the Dead produced a voodoo blog post both here and on the blogs of the Romantic Novelist’s Association and Lovahappyending.com.
The October  ‘Spellbindingly Fun Blog Party’ to launch ‘How Do You Voodoo?’ was an absolute blast! Lots and lots of bloggers signed up to join in the fun and cast fabulous spells on their blogs. I was amazed how poetic and imaginative everyone was as well as wonderfully supportive and generous! 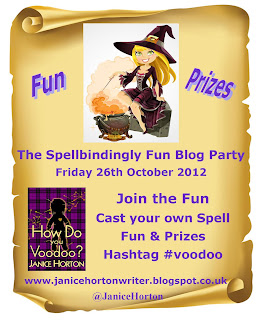 In November, another exciting venture was the launch of the Loveahappyending Bookshelf where you can find exciting new authors and the publishers who support them, together with independent authors like myself, who are trying to make their mark. To keep in step with this, I have launched a new venture of my own in connection with the website. I am now editing a twice monthly brand new and tartantastic ‘Bookshelf Reviews’ feature to support the authors and publishers involved.

It’s been a truly fantastic blogging year. I’ve blogged every Friday throughout 2012 and in between my own posts I’ve featured some fantastic authors on my Author Showcase. I’ve also played away, guesting on lots of other writer’s blogs and have made lots of lovely blogging friends. I’ve really really enjoyed myself. But to end the year on an ever higher note, I’m astonished and delighted to have been awarded the Blog of the Year 2012. You can read all about this here (last week’s blog post). So all that remains now at the end of 2012 is for me to say Happy Christmas and wish you a very happy New Year. Do join me in 2013. I’ll be here every Friday and will update my author Facebook page regularly. You can find me on Twitter @JaniceHorton
Stop Press: I'm talking about Christmas over at Dizzy C's Little Book Blog's Festive Fun Feature - here