I’m sooooo late catching up on November's post because I've been ‘snap gapping’ again – this time to the Kingdom of Bahrain in the Arabian Gulf. 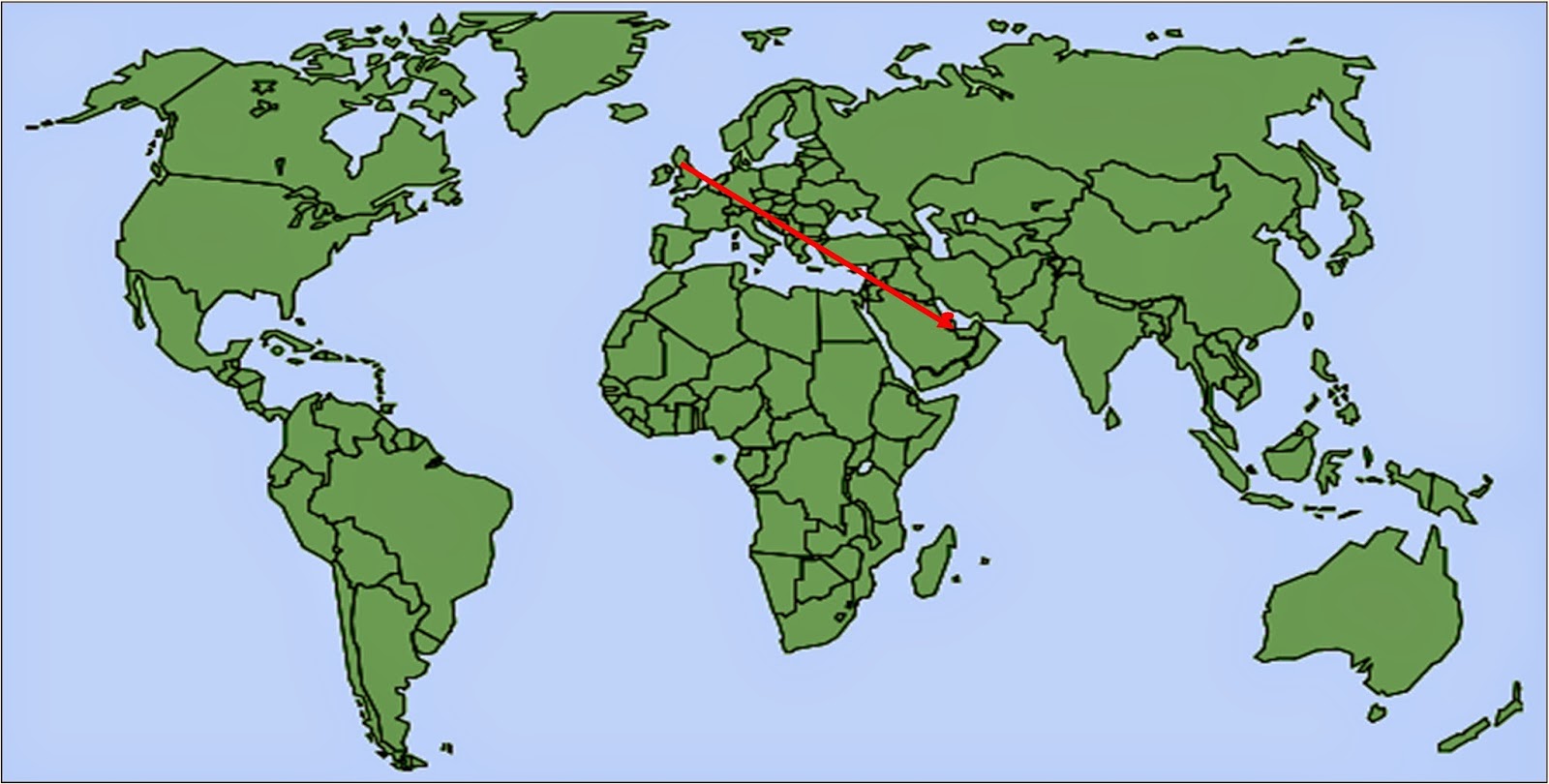 Trav and I went to Bahrain to visit and stay with a couple of dear friends who live and work over there, so we were in fact, tourists by default. Bahrain is a country that hadn’t actually been on our radar as a holiday destination but it really is a well worth a visit if you have a penchant for fascinating, cosmopolitan, and multi-cultural locations that are as rich in heritage as they are in fun and excitement. It has to be noted there has been and still is some political unrest on the island but at no time did we feel unsafe. On the contrary, we felt at ease everywhere we went by day or by night, as the Bahraini people are so friendly and welcoming.

Our lovely friends Sue and Pete took us out and about for the ten days we were there and what a privilege that was for us – the country is vibrant and booming. Some days we ventured far into the hot white sands of the desert. On other days, we immersed ourselves in the Bahraini café culture and drank Arabian coffee and ate succulent dates (never in equal numbers – you can have one or three, for example, but never two or four). In the evenings, we ventured into the city and to hotels like The Soffitel or The Ritz Carlton for decadent sundowner cocktail and a delicious dinner. 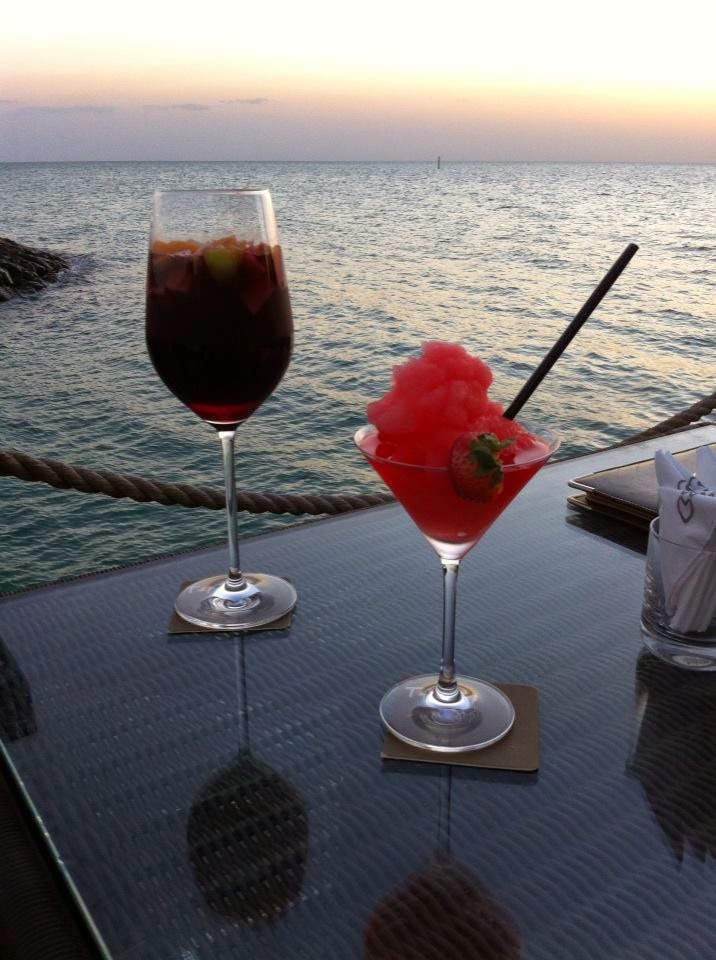 Sundowners over The Persian Gulf

We traveled from Glasgow International to Bahrain via Dubai with Emirate Airlines. You can sign up for an Emirates air miles loyalty card and news of flash sale prices on the Emirates website. As you can see there were heavy grey skies over Glasgow as we left! 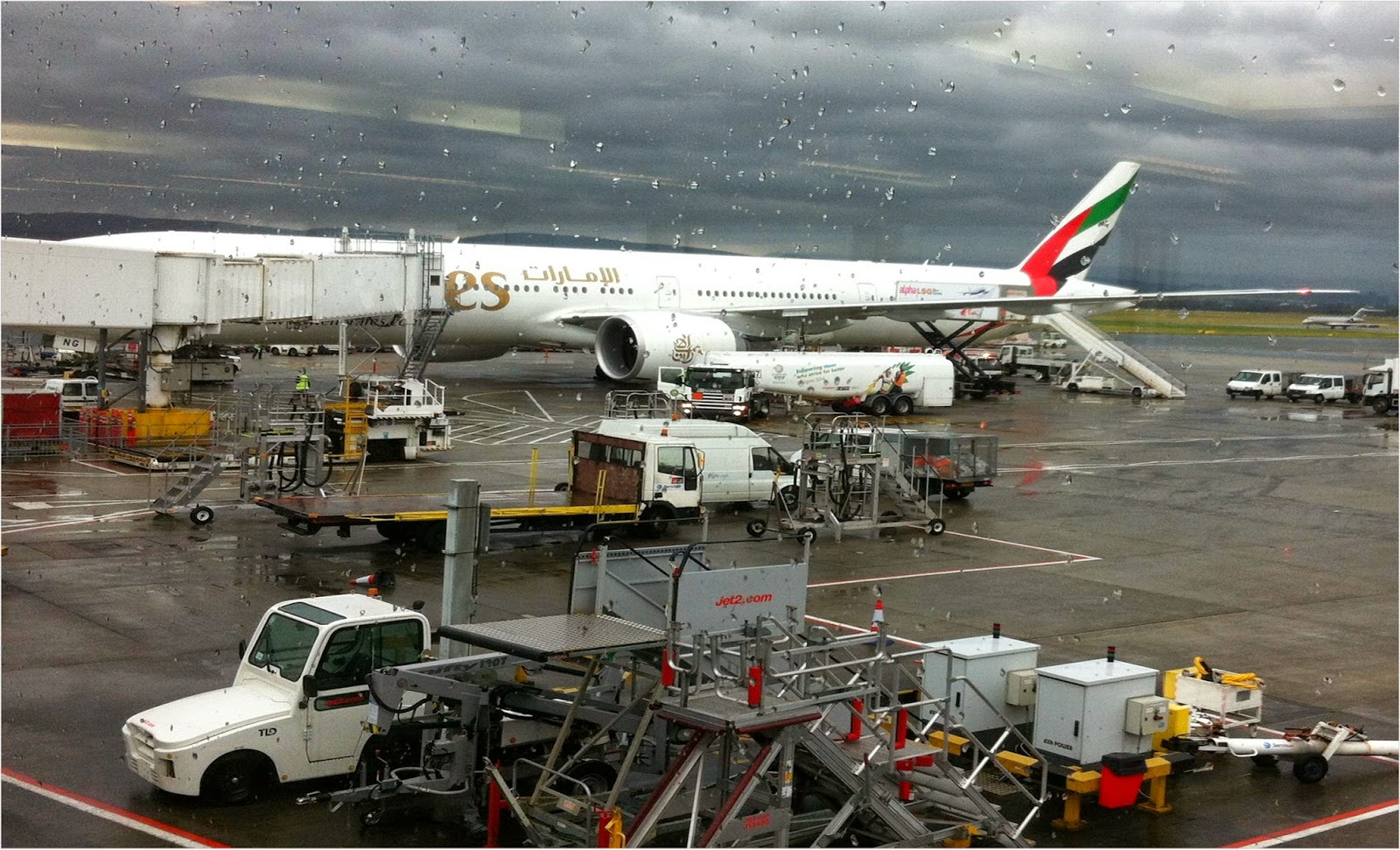 Highlights of our Bahrain Trip: Top of the list! Catching up with our lovely friends Sue and Pete!

Visiting The Tree of Life - in the shimmering white sand of the Bahraini desert stands an isolated and very old mesquite tree. Its girth is broad and its branches are wide and dipped with the effort of holding up its green foliage. Some of the branches are now artificially supported to prevent them snapping. Local lore dates the tree in millenniums but a study was conduced in 1986 in conjunction with by the Smithsonian Natural History Museum of Washington DC, USA, and it was then concluded that the tree had been planted in c1583 AD during the Late Islamic Stage. But the really interesting thing about this tree - is that to this day its source of water remains a mystery. Some believe the tree gets water from an underground spring but that doesn’t explain the complete lack of any other trees or green vegetation in the vicinity. I loved the journey out into the desert, passing working oil rigs and desert settlements and I particularly loved the sight of this lonely old tree on its unique hillside desert setting. 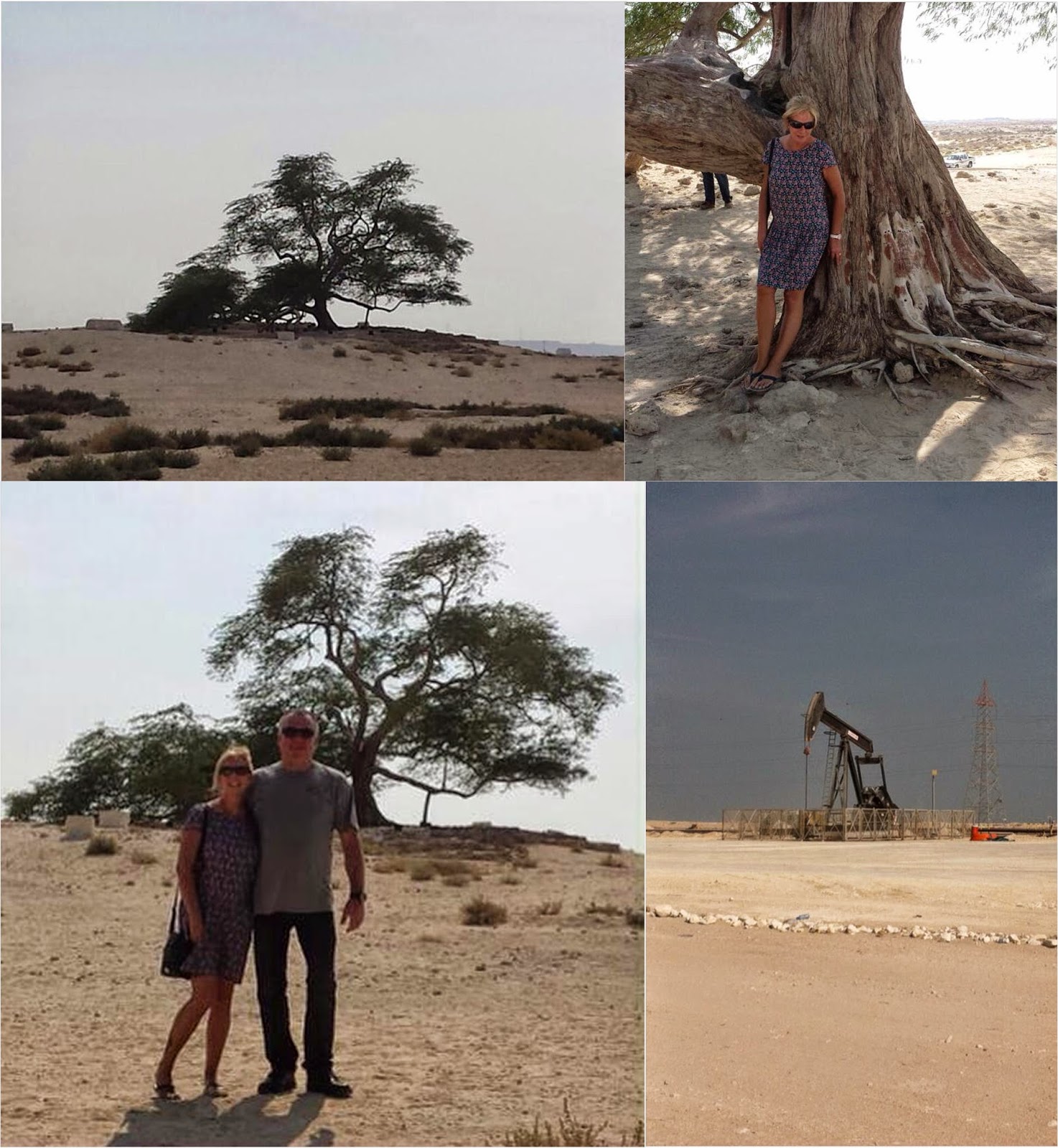 Amwaj – the floating city. The Amwaj Islands project is an artificial island development in Muharraq, Bahrain. Known as The Floating City - it is still partly under construction but has a shopping mall, restaurants, hotels, waterfront villas and chalets and apartments - all intertwined with a series of canals, enabling residents to park their boats by their own back garden. There is also a white sand beach where we paddled while also admiring the skyline of Manama in the distance. The island project is beautiful, ambitious and totally incredible. 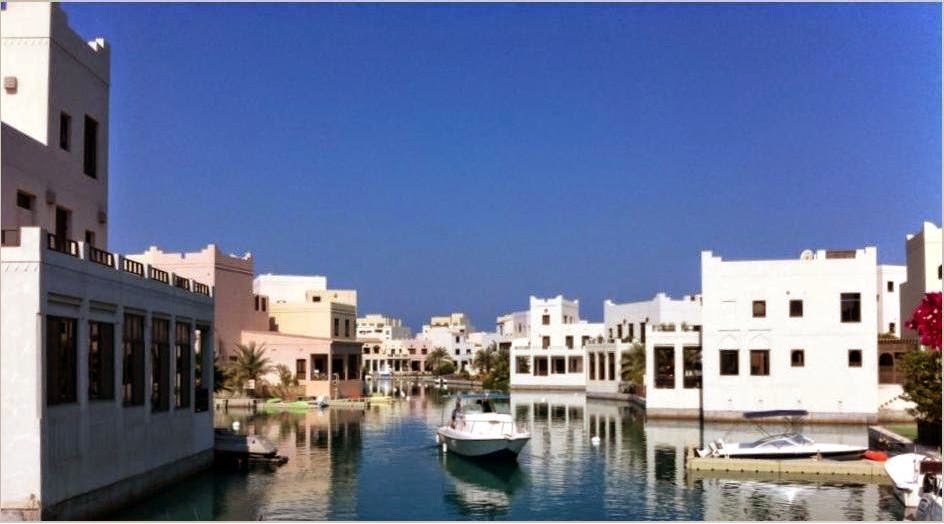 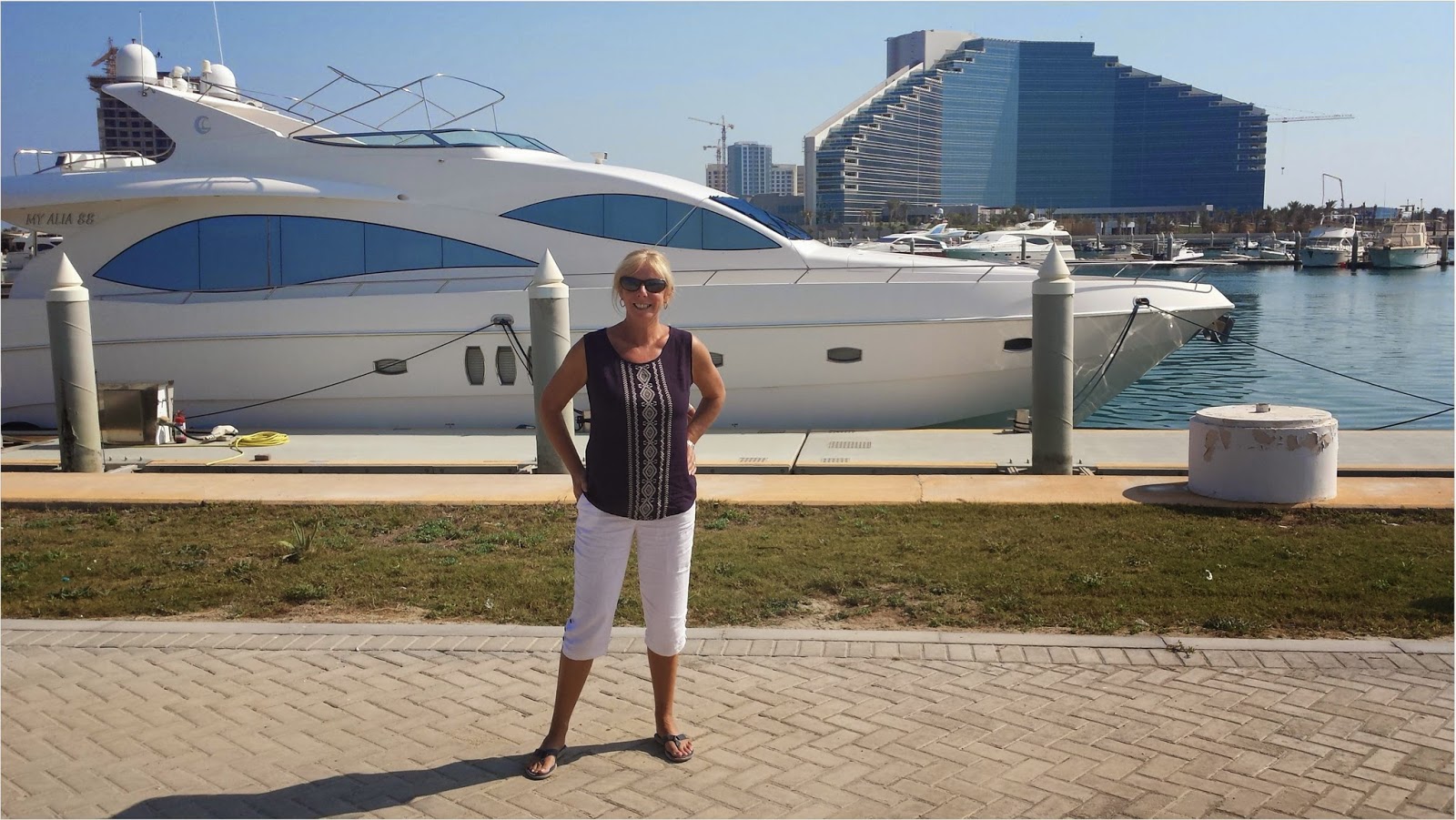 Here I am at the marina in Amwaj Bahrain

Bridging the International Gap. The King Fahad Causeway links Bahrain and Saudi Arabia and is one of the world’s longest bridges between two countries. You need a visa to enter Saudi Arabia but you can drive to the midpoint on the causeway and enjoying the glorious view across both countries. The road to Saudi Arabia

Grand Prix International Circuit: Bahrain is famous for its F1 venue. Tens of thousands of visitors attend each April. Here I am standing in the vast sand car park outside the stadium! 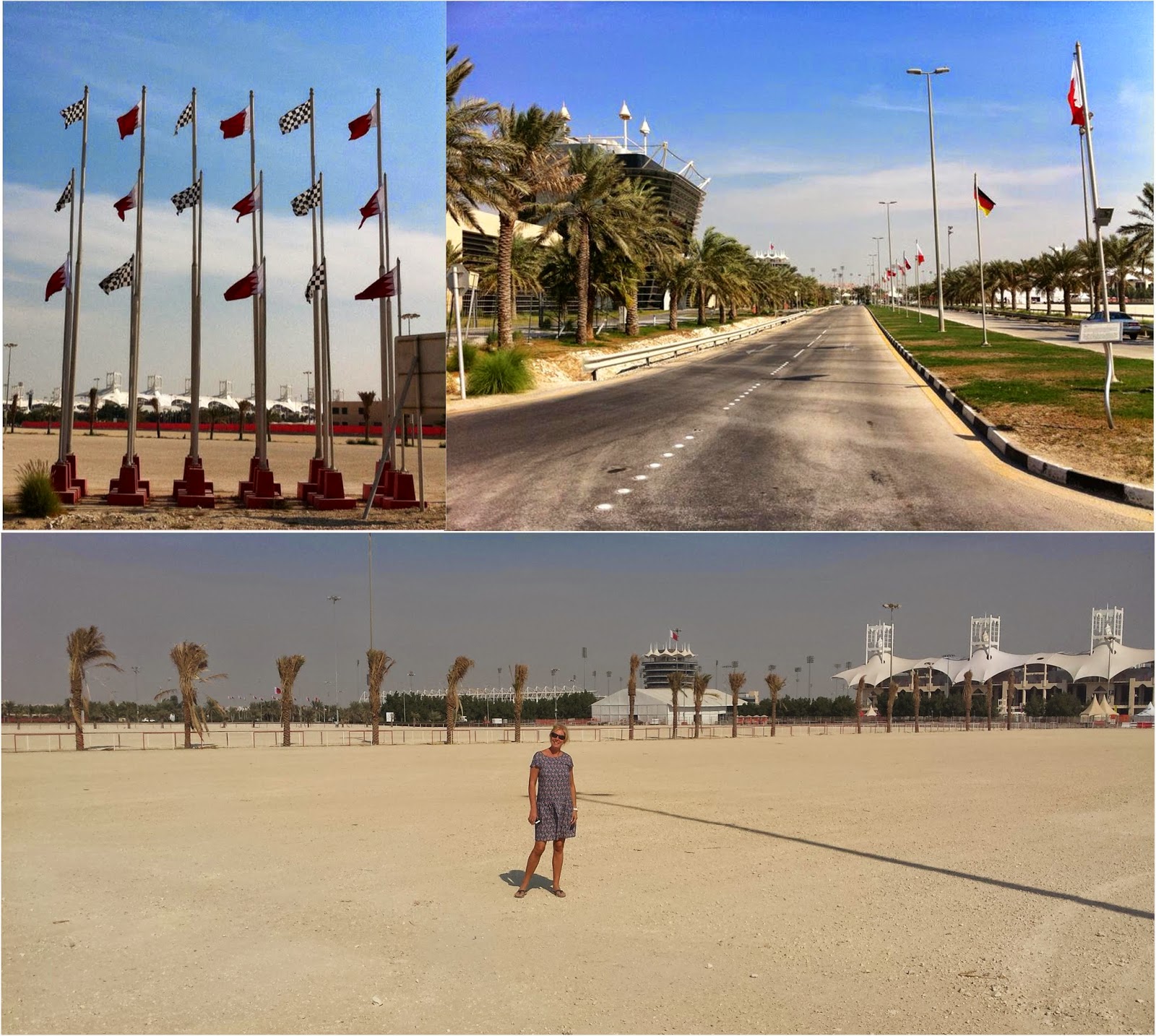 Shopping: There is a certain freedom that exists in Bahrain that attracts many shoppers from neighbouring Gulf States. We (mostly) window shopped in many of the air-conditioned malls which have lots of familiar western outlets like Marks and Spencer. In the Souks, we browsed in and out of exotic perfume shops amongst rich and heavenly fragrances with prices that made your eyes water. 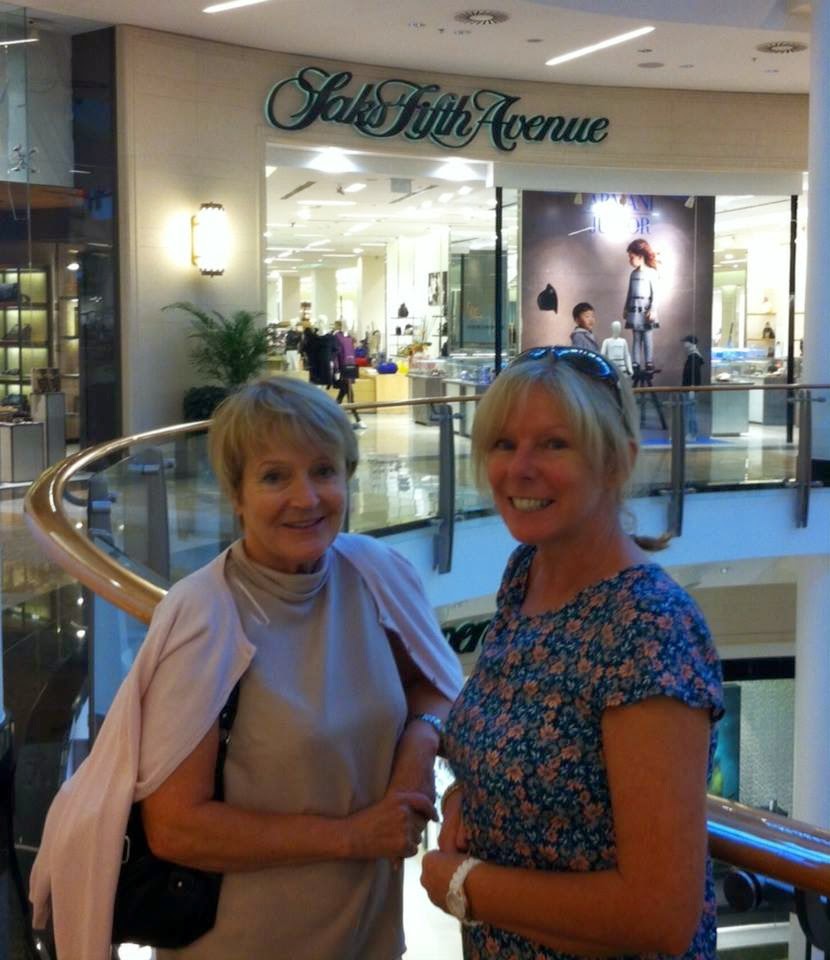 Sue and I at The Mall

Nights Out! In the evenings, we either socialised with the ex-pat set at the Bahrain Football and Rugby Club or watched incredible sunsets while sipping cocktails on balmy terraces that overlooked the sea. It was fabulous and exotic. 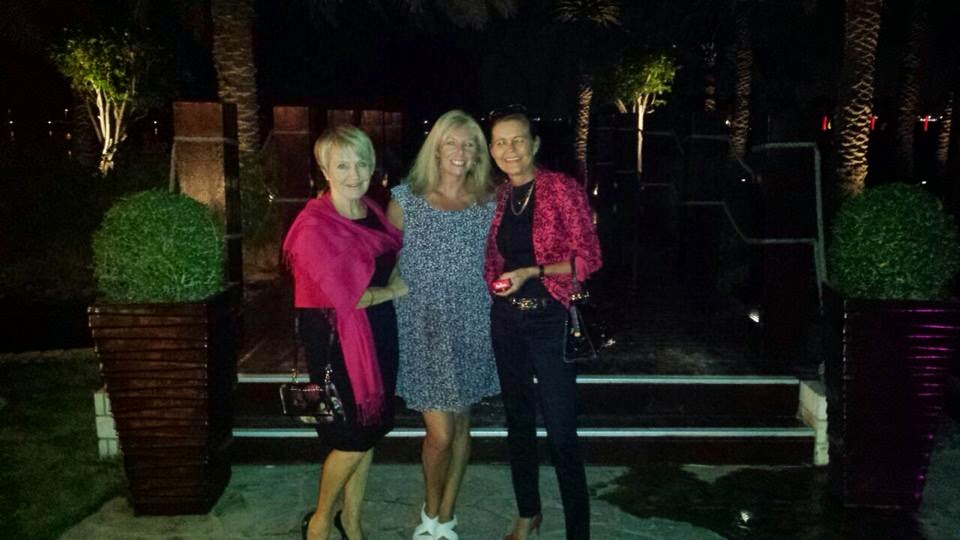 I’ve just written up a full ‘Snap Gap’ travel report on Bahrain for Loveahappyending Lifestyle Magazine which, if you’d like to read more about Bahrain as a travel destination and more of my recommended sights, you can read it by clicking HERE.

I’ve agreed to write several more of these types of travel reports for LLm throughout 2015 and it was while planning which locations to feature in the magazine that I came to realise that Trav and I have been fortunate to have visited 32 different countries over the years – and some on several occasions. These include: The United Kingdom, The United Arab Emirates, Antigua, Aruba, Barbados, Bahrain, St. Barths, Bonaire, St.Eustatius and Saba, Curacao, Cyprus, Dominica, Dominican Republic, Egypt, Spain, France, Grenada, Greece, Honduras, Israel, Italy, South Korea, St. Lucia, Monaco, St. Martin, Martinique, Mauritius, Maldives, Turkey, United States, St. Vincent and the Grenadines, British Virgin Islands.

You can create your own world travel map using this website: http://matadornetwork.com/travel-map

December Update: During December we also ‘Snap Gapped’ from Glasgow Prestwick to Tenerife. We flew with Ryanair and rented an apartment for a week. While Trav was away on a diving course with AmarillaDivers I was working on the edits for ‘Castaway in the Caribbean’. It was wonderful- and at the same time rather strange – to go from 4 degrees C to 24 degrees C in just over four hours of the flight time. From these photos you can see that it wasn't all work! We are back in Scotland just now for Christmas and so I want to wish you a very happy Christmas and best wishes for the new year. 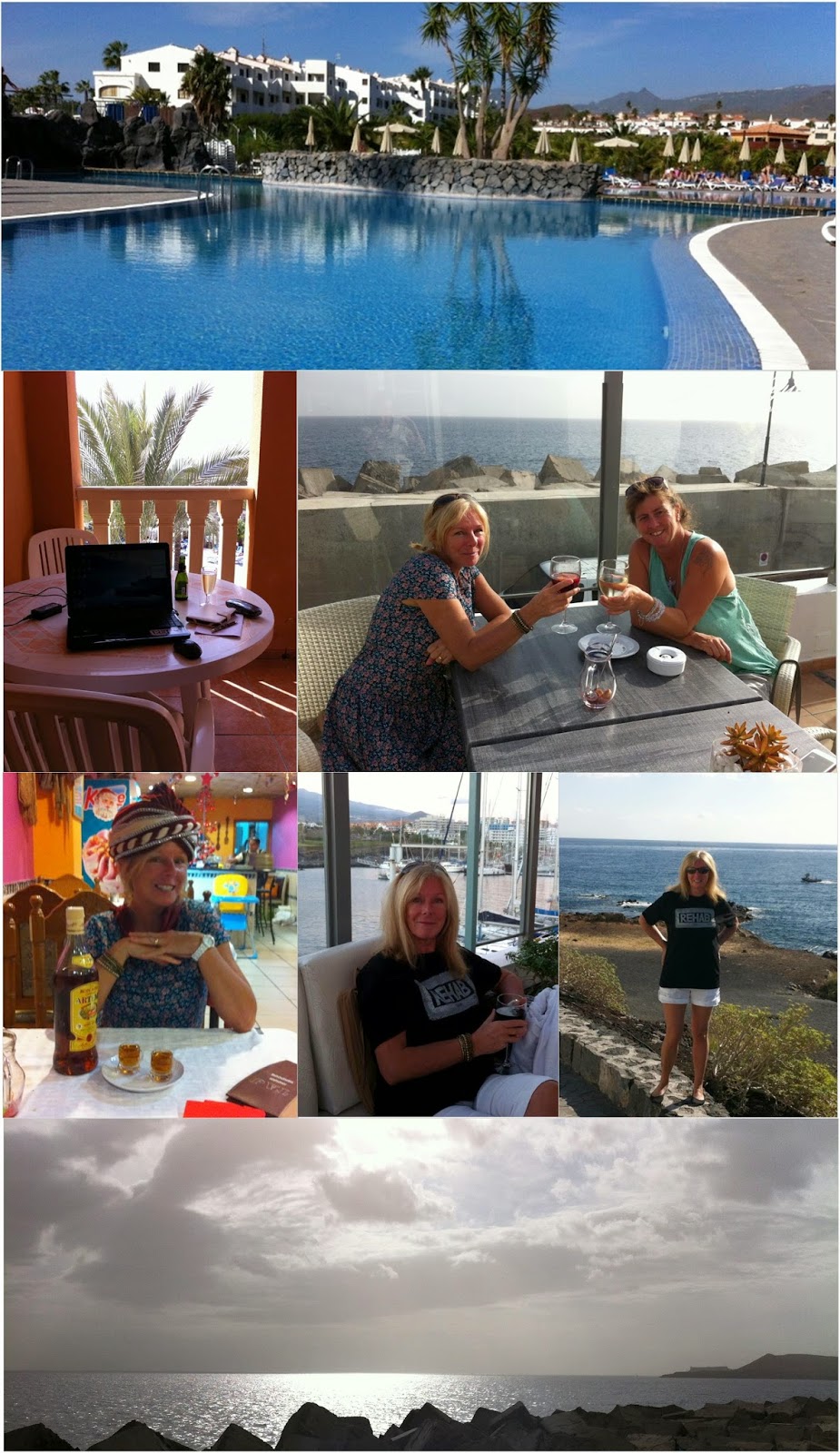 Tenerife in December - sunshine, writing, having fun and catching up with friends

I’ll be back before the year end with a round up of 2014 – the writing and the travelling - and to share with you our hopes and plans for 2015 and to hear about yours. See you then my lovely friends!