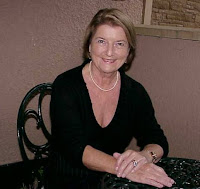 Christine Richard OBE is an incredibly busy woman with over twenty five years of experience of public life in . She is - or has been - a chair person, a presenter, a speaker, a politician, a magistrate, an executive, a counsellor, a consultant, a patron, a mentor, and an advisor to Government. She was awarded her OBE in 1992.
Christine’s leisure interests include her family, literature, art, music, theatre, food, wine, and as member of two racing syndicates based in Perthshire, horse racing. She is also a member of The Scottish Arts Club in .
With such a wealth of business experience and an intimate knowledge of hallowed halls, when I heard Christine had written a novel, I knew I wanted to read it.
Whitewalls is a contemporary novel set in and I asked Christine to tell us a little more about it.
“Whitewalls is a family saga, set in the present day.  The title comes from the name of the house which is at the heart of the book.  It is a Scottish Baronial house set on the banks of the River Tweed.  The story is about four generations of the Douglas and Bruce families over a Spring and Summer in the 2000s. As well a host of principal characters there are cats, dogs, ponies, racehorses, locations in , Burnmouth, Yorkshire, , the Haute Savoie regions of and back again.”

How much personal experience do you put into your novels and how much is research?
“I think, on the whole, I followed the adage "write about what you know" and I have followed the lives of families like this for a long time.  Indeed I have at times been involved personally although the book itself is a work of fiction.  There are some real people in the book, with their permission, and include James Thomson who owns the Witchery restaurant and Prestonfield House in Edinburgh, and Stephen Winyard, owner of Stobo Castle Health Spa where some of the action takes place.”
To plot or not to plot – as a writer how much of a planner are you?
“I sketch out each chapter so I have a starting point, though characters and events do take on a life of their own and I allow them to do that.  After all they can always be brought back to the original plan.  Although Schubert said, the hardest thing was not writing the music but dropping the unwanted notes on to the floor.  I know exactly what he meant!”
Do you have a favourite place to work?
“I generally work in my very messy study at home.  I call it my creative space but from time to time have a good clear out then piles of paper build up again.  I keep cards, quotes, articles in case they come in useful.  Another wonderful place in which to write is Cliff Cottage, a writer’s retreat, where one can go to stay and do nothing but write, eat, drink and sleep for up to a week at a time. Here I get great inspiration from sitting in a glassed-in veranda looking out to sea.”
Was there any particular author or book that made you want to be a writer?
“I was very impressed with Rosamunde Pilcher, who also understands family dynamics, and I met her at an RNA lunch I helped to organise at the Scottish Parliament, when she was presented with a lifetime achievement award.  In some ways I have copied her style of moving locations and concentrating on different characters or groups of characters before bringing them all together again.  Another writer who impressed me tremendously was Mary Wesley.  I enjoyed the darker side of her books.”
Can you tell us what you are working on now with regard to your writing?
“Yes, I am currently writing a sequel to Whitewalls, called Autumn at Whitewalls.  This is in response to a number of kind people who have been asking me what happens next. It should be published in time for Christmas. I also write articles and do art reviews for on-line magazine, Lothian Life, and more recently the glossy magazine, Edinburgh Life and Lothians.”
Whitewalls Giveaway!!!
Christine has kindly offered one lucky reader a complimentary copy of Whitewalls! All you have to do to be in the draw to win is to leave a comment on this blog saying why you’d like to read Whitewalls. The winner will be picked at random using a fair and impartial system. As usual, for those who have trouble leaving a comment, you can email in your entry to janice.horton@btinternet.com. You can enter this giveaway between now and midnight on 31st July 2011 (BST). Good Luck!

Whitewalls is available to buy from Amazon.co.uk and Amazon.com both in paperback and Kindle format or from most book sites, bookshops and libraries.
Interesting Footnote: Christine was once a contestant in an ITV gourmet TV show, Chef V Britain, challenging TV chef Gino D’Acampo to cook her signature dish, ‘Posh Cottage Pie’. Currently she is working on a new proposed web-based TV station aimed specifically at an educated female audience.
Posted by Janice at 08:05

A wonderful interview from a fine and talented author, It sounds an excellent book. Thanks for hosting her,

Fascinating, and always interesting to hear how others approach the job. I enjoyed all of it but I must confess the idea of 'Posh Cottage Pie' is particularly enticing.

Thank you, Janice for introducing Christine to us, she sounds an amazing lady. And I will be looking out for her book, Whitewalls. I too love Rosamund Pilcher

Great interview, Christine and Janice. I'm exhausted reading about you, Christine! And, yes, Whitewalls reminded me of Rosamund Pilcher, whose books I love.

Thanks Yvonne for your comment.Yes, I agree - Christine is indeed a fine author!

Hi Bill - yes, when I found out about the Posh Cottage Pie & that Christine had worked with the gorgeous Gino, I had to put that in the interview somewhere. Go Christine!

Hi Pauline, yes, Rosamunde is such a classic and fabulous writer - and I'm proud to say I too have met her (at the lifetime acheivement award luncheon Christine mentioned) and I was so impressd with how graceful she was. So if you like RP's books you should give 'Whitewalls' a go.

Hi Rosemary - me too - I don't know where Christine gets her energy but her zest for life is amazing (as are her stories!). Thanks for popping over, Rosemary. It's lovely to see you.

Hi Melanie! Thanks for popping over from Canada!

I'm pleased that Whitewalls is now available on Kindle - because as you know - I do love my e-reader!

Great interview,Janice and very inspiring. Christine sounds so calm in spite of her hectic life!

Hi Myra - yes, I agree, and I always thought I was a busy person!

Really interesting Janice, I haven't been to Scotland for years but I really MUST book to go again.

Hi Cara, thanks for your comment. I would recommend Edinburgh as a must see over the next few weeks with the Literary Festival, The Fringe, and The Festival. It's such an exciting culturally vibrant city!

Almost any good novel set in Scotland has my vote. I'm past my traveling days, but Scotland was a favorite place. Revisiting it on the page (or Kindle) is always a pleasure.

A well-recommended novel set in Scotland gets my attention, and I'll read Whitewalls with anticipation. Though I no longer travel, the U.K. was my favorite place, and Scotland in particular. On the printed page (or Kindle), I take pleasure in revisiting places I love.

Whitewalls sounds like 'my' kind of book, I love family sagas and a Scottish setting is a double bonus. Have added it to me 'To Read' list for when I get a Kindle for my birthday next month!
Would love to know your recipe for Posh Cottage Pie!