The walls of my small study are lined with all sorts of books: hardbacks and paperbacks, non-fiction and fiction, biographies, thrillers, romances, and children's books old and new. I love them all. So over the coming weeks and months inbetween writerly chat and author interviews, I'd occasionally like to talk about the books I've collected over the years and to introduce you to some much loved authors. 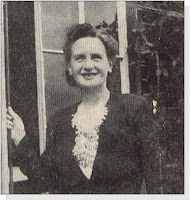 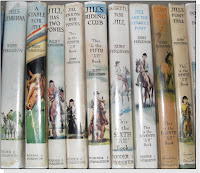 Let's start at the very top shelf by taking a look at nine children's books written between 1949 and 1962. These books are very special to me and through my 1960's childhood I read them over and over. They were my best friends. All I had to do to achieve my dream of owning a pony and living in the countryside was to open up a 'Jill book' and lose myself in her wonderful make-believe world.
These books are all first editions in their original dust jackets.

Some years later, I was delighted to discover that Ruby Ferguson had written eight mystery thrillers under her maiden name of R C Ashby. I now have most of these treasured old books on my shelf. The most prized is the signed first edition copy of The Moorland Man - the Romance of a Northern Farm published in 1926 by Hodder & Stoughton. They are the amongst the oldest books on my shelves and none have dust jackets, which is just as well, as I doubt I could have afforded to buy them if they had.

Ruby also wrote thirteen wonderful romance novels and I have managed to collect and enjoy reading them all. From Lady Rose and Mrs Memmary in 1937 to A Woman with a Secret in 1965. She also wrote a fictionalised memoir published in 1967. Her books were published by Hodder & Stoughton and Macmillan in the .

My wee West Highland terrier is called Ruby after the author Ruby Ferguson
What books are on your top shelf and have you ever named a pet after a much loved author...?
Posted by Janice at 15:38