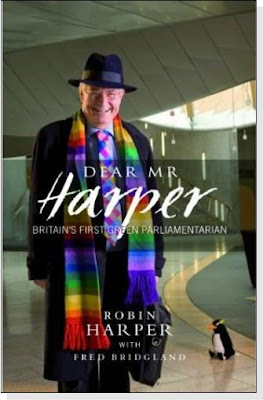 This week I'm interviewing a man who has led an astonishingly interesting life and written a book about it all. Recently retired, he has been a teacher, a musician, a sportsman, even (for a spell) a professional actor and so it's a wonder how he ever had time for politics. Robin Harper joined the Scottish Green Party in 1985 and famously became the first Green elected to Parliament in in 1999. Having met Robin, I'm delighted to tell you that all his years in Parliament have done nothing to dampen his boyish enthusiasm or fade his iconic multicoloured scarf!

Dear Mr Harper - The Autobiography of Robin Harper has been described as "an entertaining book in which Robin's convictions, both Green and otherwise, come through almost subliminally: his message, because he certainly has one, is all the more powerful for that". It's a description that prompted me to ask Robin more about his book.


Robin, was writing an autobiography high on your agenda?
I’d been approached a few times about a book, but the pressure of work at the Parliament was too high for me to contemplate this task before retirement. Thank heavens for an offer from Fred Bridgland, a highly acclaimed journalist and author, as it did seem to be a good idea to get something into print before the election this year.
What was Fred Bridgland’s part in the writing of the book?
Birlinn were very clear that they wanted the book in my voice. So Fred and I decided on an packed programme of interviews, many at his house and two very intense weekends of work at a writers’ retreat on the north east coast of . The more personal chapters I wrote myself, but the bulk of the book was crafted by Fred on the back of our interview sessions and discussions. Fred has written acclaimed biographies of Jonas Savimbi and Winnie Mandela, and claims he was looking forward to a gentler subject. But the first murder appears on page 30 and a stoning to death on page 95!
How did you and Fred plan the book?
I explained to Fred that my personal and political lives – even my teaching life – seemed to move on parallel tracks, with very few interconnecting points. So I didn’t feel it was sensible to write the book chronologically. We decided that themes might work quite well, and Fred developed this further, interspersing the narrative with research and explanation that have added considerably to the interest of the text. My life in Orkney, my time in Ceylon, teaching in Kenya, my passionate feelings about trees and the marine environment and my political life – from the sinking of The Rainbow Warrior to ‘Tripping up Trump’ – all these and many other themes are explored, I hope with humour and a light touch.
The book has been described as an honest account of your life. Has that honesty caused you any difficulties with your political colleagues?
My colleagues say they are enjoying it! Mainly, I hope it’s a good read. The book focuses mainly on my personal experience and doesn’t give a detailed account of my work for and with the Green Party over the last 25 years. This may be for another book.
When did your deeply held convictions on environmental issues first arise?
I was interested in environment and wildlife from an early age. I still have drawings I made of birds and plants when I was 13, and some beautiful seashells I collected in Sri Lanka when I was 9. I’ve always loved being in the open air – mainly hill walking and sailing, and beachcombing on my own. Reading Rachel Carson’s book, Silent Spring, and a book called Future Shock in the early 1970s alerted me to the alarming state of the world. I began to get more and more anxious. I subscribed to New Internationalist, but was still not inspired to take political action. It wasn’t until 1985 and the sinking of Greenpeace’s Rainbow Warrior ship off Auckland, New Zealand, that I was galvanized into action. Rainbow Warrior was about to set off into the Pacific to protest against the French testing of nuclear weapons at Muroroa Atoll. Two French secret service operatives blew holes in the side of the ship, killing a young Dutch photographer who was on board. I joined the Scottish Ecology Party (as it was then), Greenpeace and World Wildlife Fund on the same day and have never looked back.
What did you enjoy most about writing the book?
The challenge of working with a first-class journalist, who had a clearer sense of what was interesting in my life than I did, meant that I found out a great deal about my family that I didn’t actually know. I had conversations with my two brothers that opened up all sorts of new insights into the lives of my parents and their relations, and even those of my brothers, to whom I have always been close.
What would you describe as the lowest point in your political career?
Oddly, this was in the 2007 election, when I was returned with six new colleagues. I have always felt that the point of political activity is to do your very best to get your voice heard at every level – ultimately, to have an influence on government. We had the chance, two days after the election, of possible talks with the Labour Party, but I was unable to persuade my six new colleagues to even think about working with any of the other parties in the Parliament.
What would you describe as the highest point in your career?
There is something very special about being the first person ever to do something. So I will always count my election to the Scottish Parliament as being the most exciting day of my career.
Can you tell us the inspiration behind the iconic scarf?
In the early 1970s a little shop in St Stephen Street in Edinburgh called Number Two started selling stripey things of all sorts – sweaters, gloves, beanie hats and, of course, scarves. I liked the bright scarves and was also a great fan of Dr Who, in the Tom Baker incarnation. I still have the scarf I purchased back then. In 1999, when the Party was trying to shake off its image as being all muesli, sandals and sunflowers, there were some who suggested I stick with a sober-suited image, rather than mar it with a brightly-coloured knitted scarf. My attachment to the accessory was so strong, though, that I refused to dispense with it and it has since become – not entirely to my surprise – something of an icon.
Do you have a website? Do you have a blog? Do you Tweet?
My website is currently being rebuilt. I don’t yet blog or Tweet – but I’m planning to start a blog as soon as I get to grips with my new life. 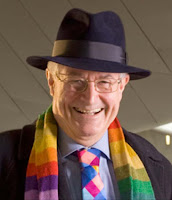