To South Korea with Love…..

In previous posts, I’ve blogged about our fabulous four month long trip of a lifetime around South East Asia. In this post I’m chronicling the grand finale destination of our Grand Asian Trip - South Korea.

Our middle son, James, who is an English teacher, lives in the city of Daegu in South Korea with his lovely Korean wife Sujeong and our baby grandson Aaron. During this visit it would be our grandson’s first birthday – a big event in any case or place – but in South Korea it is marked by the hosting of a big formal party for friends and family. 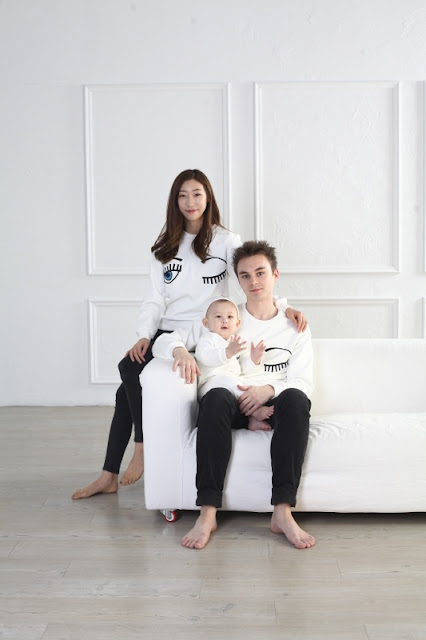 Our middle son, James, lives in the city of Daegu in South Korea with his lovely Korean wife Sujeong and our baby grandson Aaron.

So a function room was booked, catering was organised, a professional photographer was present, and gift bags for the guests were stacked on a welcome table that was set up as a wonderful showcase for young Aaron’s first year of life. 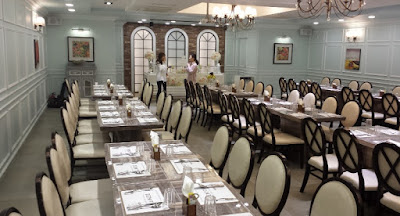 For Aaron's first birthday party a function room was booked...

Our son bought a new suit for the occasion. Our daughter-in-law, who looked stunning, had been to visit a hairdresser and a makeup artist to prepare for the big day. Aaron had a new outfit too. We, however, arrived from Bangkok (+32 degrees C) to Seoul (-5 degrees C) shivering in the warmest clothes in our backpacks. I’d been hauling a pair of canvas sneakers, a pair of jeans and my favourite cashmere sweater all around South East Asia for four months, as I knew it would be cold in South Korea in February. My husband wasn't so prepared and so, shivering in his t-shirt and flip flops, he garnered a few strange looks on the bullet train from Seoul to Daegu - where he bought himself a pair of socks. 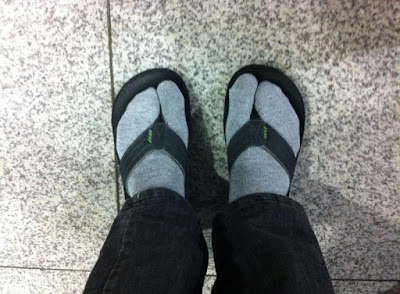 My husband garnered a few strange looks in Daegu...

We arrived in Daegu in the afternoon and we were met by Sujeong and Aaron. We had seen lots of recent photos and video of him over Facebook Messenger - but I was still in awe of him walking towards us at the station wearing a warm red coat and carrying an umbrella. Last time we had visited he was only just learning to crawl! 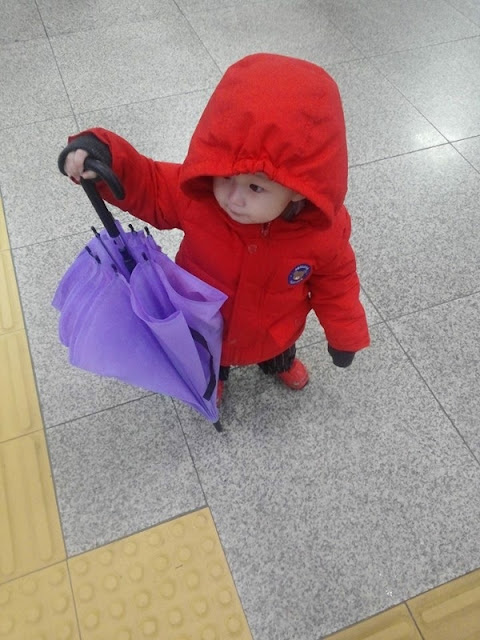 Aaron at Daegu station wearing a warm red coat and carrying an umbrella...

We had an amazing time in South Korea, we ate fabulous Korean food and spent lots of precious time with our Korean family and cuddling Aaron. 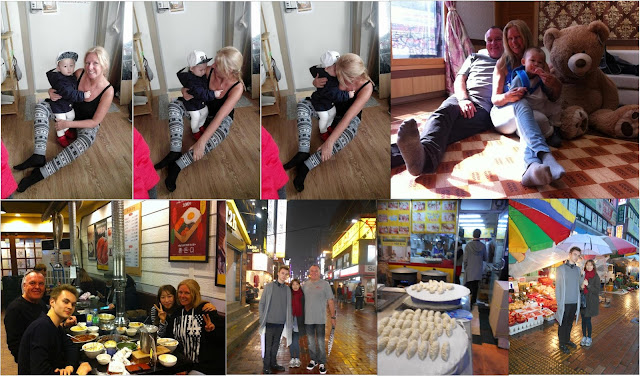 We had an amazing time in Korea...

With Sujeong as our driver, we took Aaron to Korean Toys R Us and bought him some birthday presents. We bought him a car that he can be pushed around in that will be great for the park in the summer, a baby ‘laptop computer’ that speaks about colours and shapes and other interesting things in both English and Korean - and a ‘baby’ mock TV remote that makes interesting sounds and that might distract him from his current obsession of operating the real one. 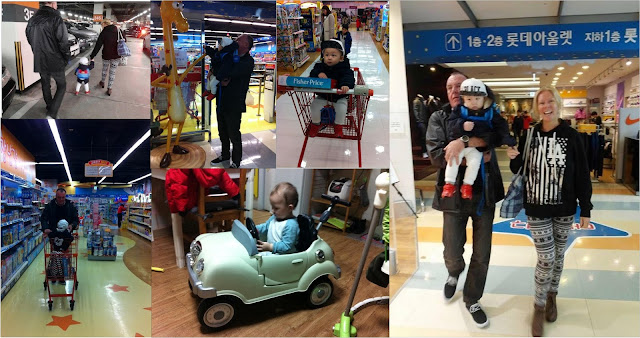 The Birthday Party was of course the main event of the week and it was a great success. It was also a wonderful occasion for us to get to know Sujeong’s extended family and to meet Aaron’s Korean great-grandparents for the first time. James’s co-workers also attended the party and it was lovely to meet them too. 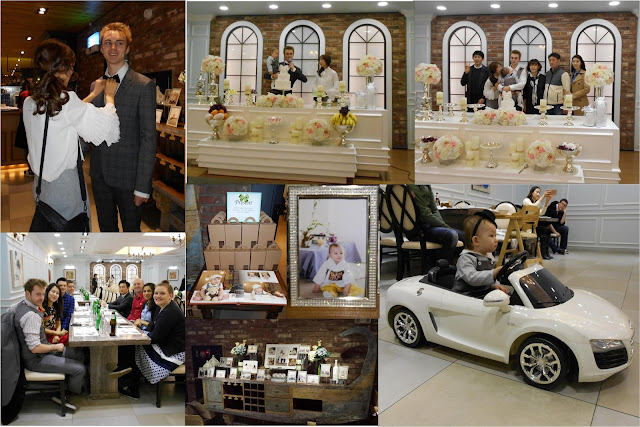 It was wonderful to meets Sujeong’s extended family and James's co-workers...

A movie had been put together of Aaron’s first year and when the room darkened and the images were projected onto a big screen at the front of the room, I felt incredibly proud and emotional and full of love. Then the rest of the week flew by and it was again an emotional time. Time to say goodbye. It’s hard to go away, knowing that they live on the opposite side of the world from us and it will likely be another year until we are able to hug James and Sujeong and our little grandson Aaron. But, thanks to social media, we take comfort in that we can see them every day through pictures and video clips that make us feel we are part of their everyday lives and that they are part of ours. We wept and hugged and left on the bullet train back to the airport. As we climbed aboard the fastest train in the world for our two and a half hour journey, Sujeong gave me a little paper bag, which she said was a gift from her mum. When we opened it later, I saw it was a tray of my favourite dumplings. They are so yummy and I had eaten so many of them during the week that she had kindly thought to provide them as a snack for our journey! 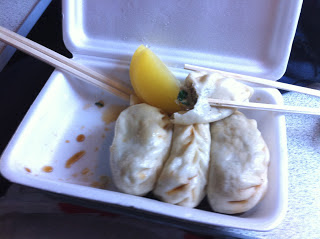 A snack for the train - a tray of my favourite dumplings!

We flew from South Korea to Bangkok and from Bangkok to Doha. We had two hours in Doha before we boarded our flight to Houston USA - a non-stop journey of over sixteen hours, during which I watched back to back movies, ate tray food and drank wine. When we reached Houston, after a total of over twenty-eight hours in the air and with a fourteen hour time difference, we headed straight for a steakhouse where we ate prime Texas beef and drank beer before crashing out for two days and two nights at an airport hotel – except for of course waking up at 3am a couple of times – as our body clocks were all over the place.

On the 1st March, we flew from Houston to San Pedro Sula in Honduras and from there we took a small plane over to our Caribbean island home of Utila, where we intend to settle down for the whole of the summer and to relax back into island time. 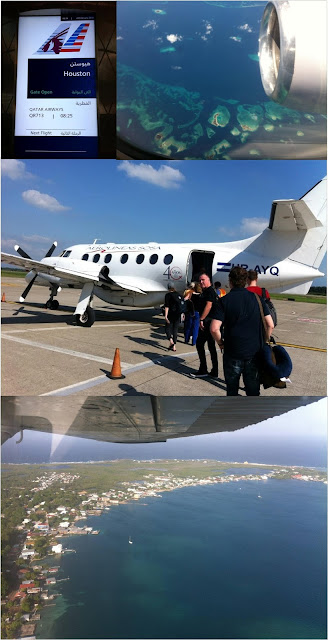 After our Grand Asian Adventure we intend to settle down in the Caribbean and relax back into island time....

Although, to comply with our visa entries, we will need to do a couple of visa runs, which means there is sure to be a couple of (yet unplanned) exciting mini trips off island to look forward to during the summer!

On the 1st April, we are looking forward to our eldest son Ben and our youngest son Iain coming out to join us here on the island with their girlfriends for a couple of weeks. Both our sons are certified scuba divers and so my husband is looking forward to taking them diving in the warm clear waters of the Meso-American Barrier Reef - which is just off the island – the second largest barrier reef in the world.

As my next post is sure to be all about Caribbean island life – do please join me again here next time - and if you'd like to be notified of future posts via email you can sign up for that on the side bar!