Harriet Schulz is an Author from Portland, Maine in the USA. Her background is in magazine journalism. She loves to travel, cruise and sail, and has published a few travel stories. Harriet has also just completed her first novel Legacy of the Highlands, a contemporary romantic suspense story set in Scotland.
Well as you all know, I do love a contemporary novel set in Scotland, so when Harriet and I got chatting on Twitter recently, I was interested to know more about how she went about researched the Scottish elements of her story, so I invited her onto my blog to tell us about it.

Take it away Harriet!

My husband and I spent three weeks in Scotland last year. It was a vacation for us both, but for me this trip had an added bonus. I would see, hear and smell the locations in my already-published romantic suspense novel, Legacy of the Highlands, to see if I’d gotten it right.

It was with a sigh of relief, therefore, that we dropped off our rental car 1,500 miles later. For me, that relief came from the realization that I’d chosen and described my locations well. My husband’s was that we hadn’t killed ourselves or anyone else as we drove on the wrong side — to us — of Scotland’s narrow, unforgiving, and occasionally one-track roads.

We followed the coast north from Edinburgh to John O’Groats with a day trip to the Orkney Islands before continuing as far west as we could go. We traveled south to Oban before returning to Edinburgh for our flight home. Two destinations were of particular importance to me — the coast north of Aberdeen, between Cruden Bay and the town of Boddam and Arbroath Abbey where the 1320 Declaration of Arbroath was prepared.

A pivotal dramatic scene in my novel required a location that had physical characteristics similar to Ireland’s Cliffs of Moher. The Internet is a wonderful research tool and I felt confident that the Bullers of Buchan, near Boddam, could be the perfect place for the action I’d planned. But I had to be sure. I posted my question to a Boddam-area chat room. Participants not only confirmed my hunch, but actually went to the site and then posted videos — with sound! — so that I could have a sense of the place. Their generosity was stunning and I thanked the Grampian Life Forum in my book’s acknowledgments.
Despite this, I still wanted to see the Bullers for myself. It was raining as we entered the small car park and headed up the narrow path to the deep hole in the cliffs that fills with the churning waters of the North Sea. The sound was deafening. Hundreds of squawking birds nest in the rocks and waves pound the cliffs with a roar. It was perfect.

Before visiting the Bullers, we stopped in the town of Arbroath. My novel is contemporary, but a phrase in the Declaration of Arbroath and an oath taken by one of its signers form the basis for a murder that occurs almost 700 years later. It was with wonder that I roamed through the abbey’s preserved ruins, imagining the courage it took to ask the Pope to urge the English to leave Scotland and her people in peace.

Novels are creations of a writer’s imagination. And while there’s a bit of leeway in fictionalizing actual locations, the more real they are, the more believable the tale.

LEGACY OF THE HIGHLANDS. Young, good-looking, successful, and wealthy. Will and Alexandra Cameron had it all until the night he went out to buy ice cream after an evening of passionate sex and never returned. When his body is discovered in a nearby Boston alley, the only clue to his murder is a Scottish sgian dubh dagger left beside it. Will's grieving widow finds refuge in the Miami villa of his best friend Diego Navarro, who has the means, power and temperament to solve the puzzle and to avenge his friend's murder. The sinfully handsome and charming womanizer's feelings for Alexandra run deep, and he becomes equally determined to win the devastated widow's heart. The attraction between them grows as they follow leads from Miami to Buenos Aires and Scotland, unraveling the Cameron family's centuries-old secrets.
LEGACY OF THE HIGHLANDS is available as an e-book from Amazon.co.uk and Amazon.com and most other e-book sellers for £1.45 and $1.99. The book has also been published as a paperback. 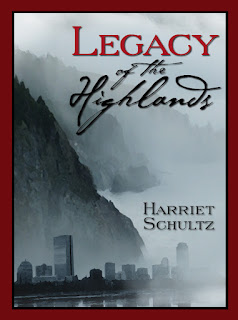 The novel’s bestselling prologue, LUST AND HONOR, is a free download from the same sites.
You can catch up with Harriet on her Blog & Twitter
http://harrietschultz.blogspot.com
Twitter: @HarrietSchultz
Posted by Janice at 09:46