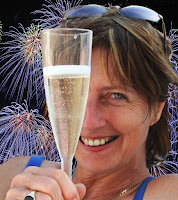 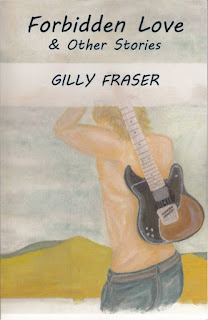 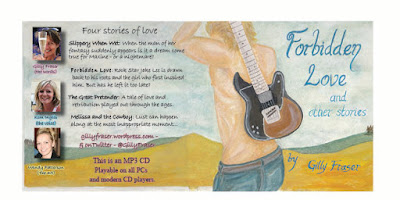 Gilly, I love the cover of This book and I'm so impressed at the fact you have had nine books published with Mills and Boon. I would love to be involved with them myself.

I'll hopefully catch you on Twitter and shall check out your blog.

Love the cover. I get the impression he's about to swing the guitar over his head and smash it to smitherenes.

Congrats on your 9 books with M&B and best wishes for loads of sales for your trek into the world of indie publishing!

I loved M&B!! Great to meet you Gilly!! Good luck with your new anthology - are these the darker, genre free stories? Yay - thanks Janice for hosting!!!

Great post, Gilly, and it's lovely to see you jumping back into the romantic fiction world! You're holding the fort beautifully while Janice is knee deep in edits.

Loved this Blog Jancice and nice to see Gilly again. Gilly featured last week on my Blog with her 1st Sentence. I love the book cover and it is already on my reading list. Good luck Gilly with everything and good luck Janice with your edits.

It's such fun to meet lots of different people on blogs!
Hope all the edits go well, Janice.

Thank you all so much for your lovely comments - it was such a great surprise to pop over to Janice's blog this morning and find that you'd all taken the trouble to leave a message.

Kathryn - I'm especially chuffed that you like the cover of my book - it was created by my very good friend Wendy Patterson, who actually specialises in painting Scottish wildlife on slate, but was happy to diversify for this project. She's a huge Bon Jovi fan, and the hero of Forbidden Love itself is a rock star - so I rather think she had BJ in mind - no bad inspiration, though I'm more of a Springsteen girl myself...

Melanie - you could well be right about him preparing to smash the guitar to smithereens - you know what these rock stars are like - and as Forbidden Love explains, this bad boy is going through a very frustrating period in his life...

Kitty - the stories in Forbidden Love are all fairly light romances, with - I hope - a humorous slant. The Great Pretender edges into slightly darker territory, but not too far. My plan is to bring out another anthology of short stories - this time with the emphasis on the sweet side of romance (so my Mum doesn't have to be embarrassed at the W.I.!) Then I'm really going to concentrate on the new story - which has been pleading for attention for ages!

Ros - Thank you for your kind words - and I'm really grateful to Janice for inviting me onto her very successful and hospitable blog...

Pauline - I haven't forgotten your kind poolside invitation - and I hope it still stands, because I've got my cozzie all ready!

Great post, Gilly, and there was lots I didn't know about you. I have downloaded your book, even though romance isn't really my forte. Once I get round to reading it I'll leave a review of course.

Congrats on taking the plunge to e-publish, Gilly! Love the cover.

That cover is gorgeous, Gilly. Good luck with it!

Chris - I truly appreciate you stepping out of your comfort zone to read my book - especially since your writing forte definitely ain't comfort! I look forward (with some trepidation...) to your review!

Talli and Shirley - thank you both very much for your kind words and good wishes - I'm very glad to have them!

Gilly - there's so much here I didn't know about you. I'm looking forward to reading Forbidden Love. Janice - hope the edits are going well.

I have to agree with all that has been said! I love this book cover. So quirky and compelling!!!Great Blog!

Hi everyone - thanks for the lovely comments and for your great post, Gilly!

Tomorrow I've a bit more about by new book Reaching for the Stars and an excerpt from Chapter One!