Our Snap Gap to South Korea 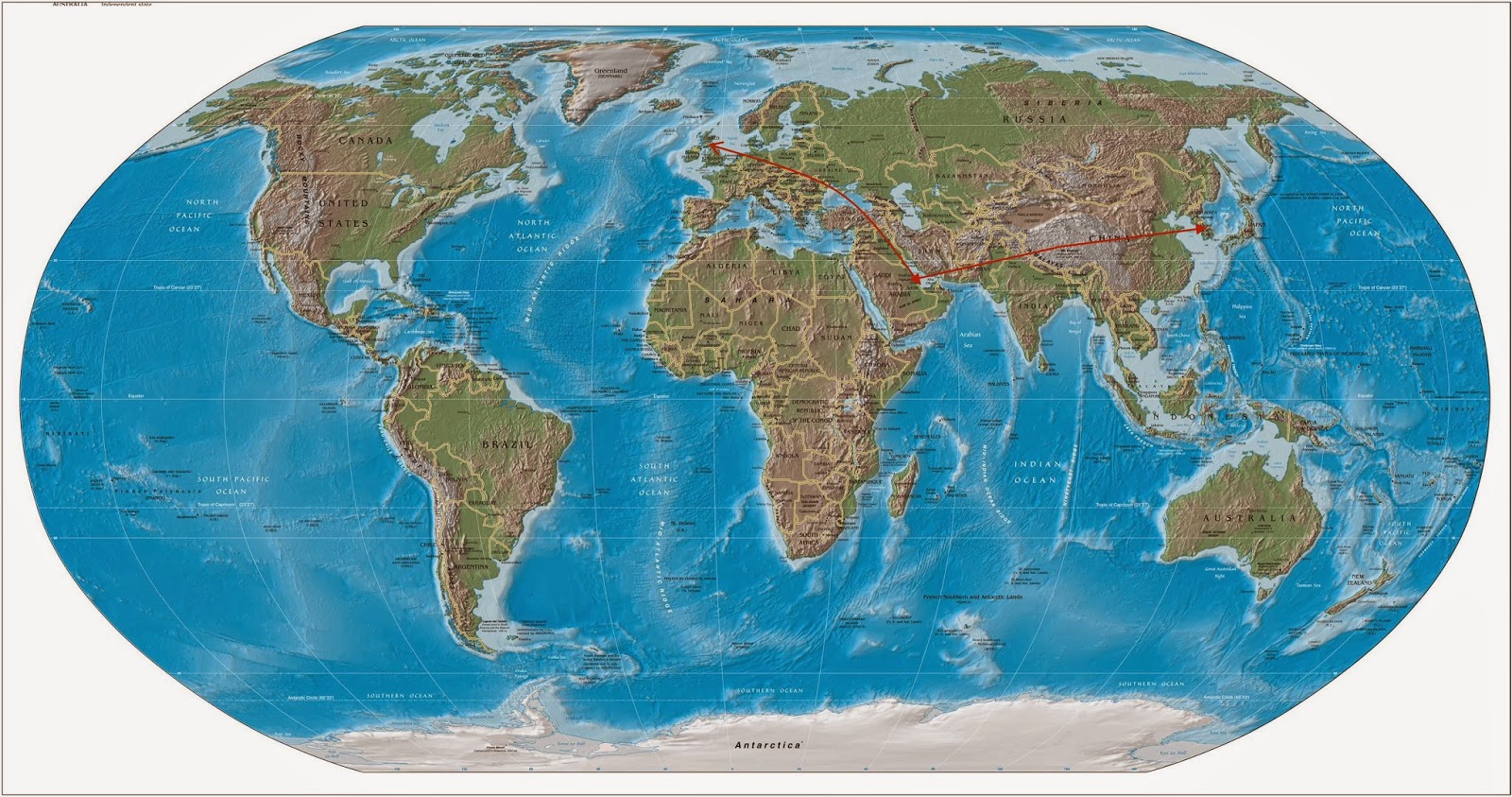 During the first week of June, Trav and I flew to South Korea to visit our son, James, who is working there as an English Teacher. We flew from Glasgow with Emirates and, having flown with this airline once before, we knew we were in for a treat with their complimentary drinks service and excellent on board entertainment system. As you can see from my photograph, taken as we waited to board, the skies over Glasgow were stormy grey as we waited to begin our seven and a half hour flight - but my mind was already on our first stop in Dubai – where we would board the new ‘double decker’ A380 aircraft to Incheon, South Korea. 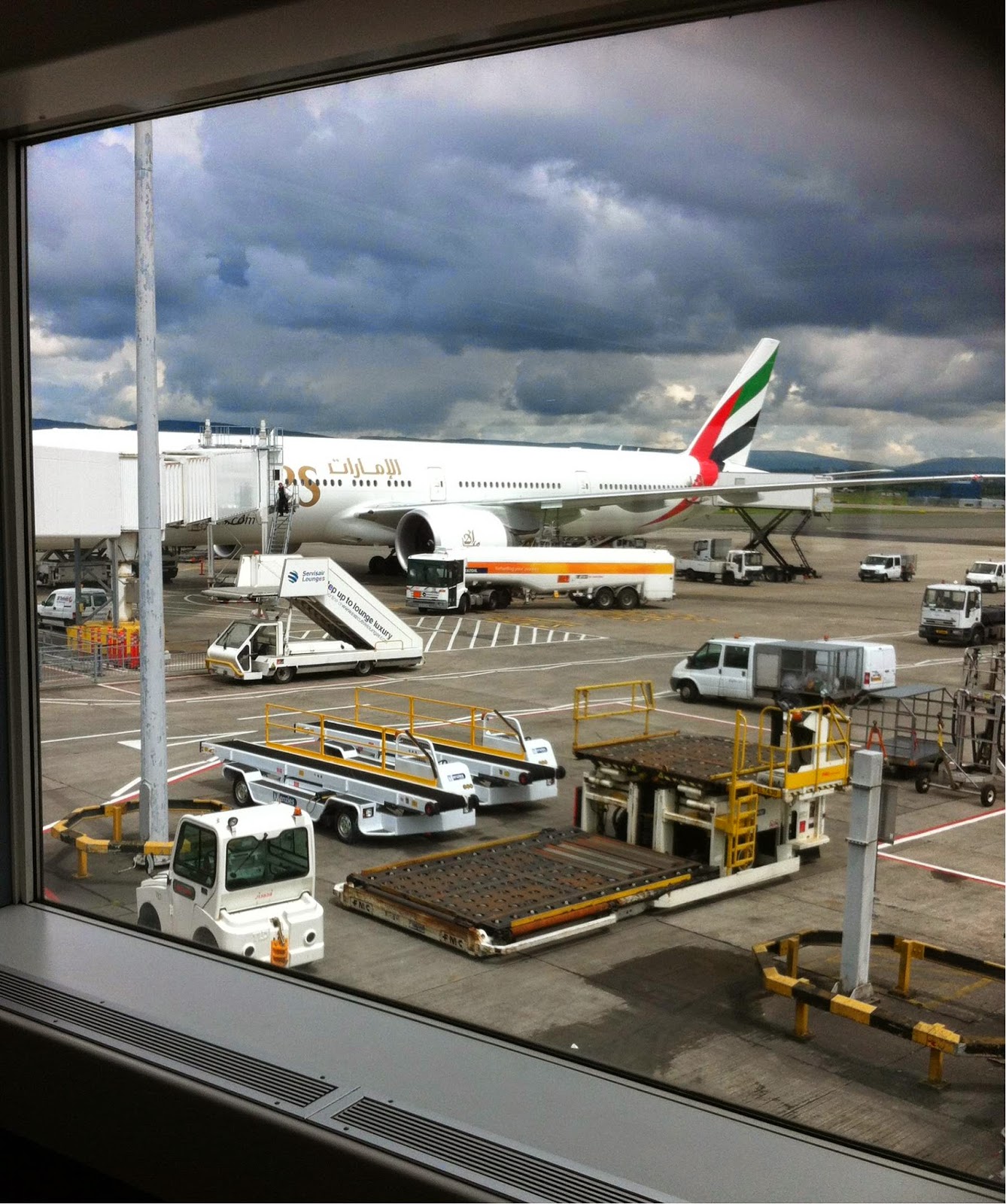 The last time we were at the airport in Dubai we passed through its elaborate main terminal. This time we were in the exclusive Emirates hub at terminal three, with all its hi-tech, high priced, eye-popping shops, sights and extravagances. 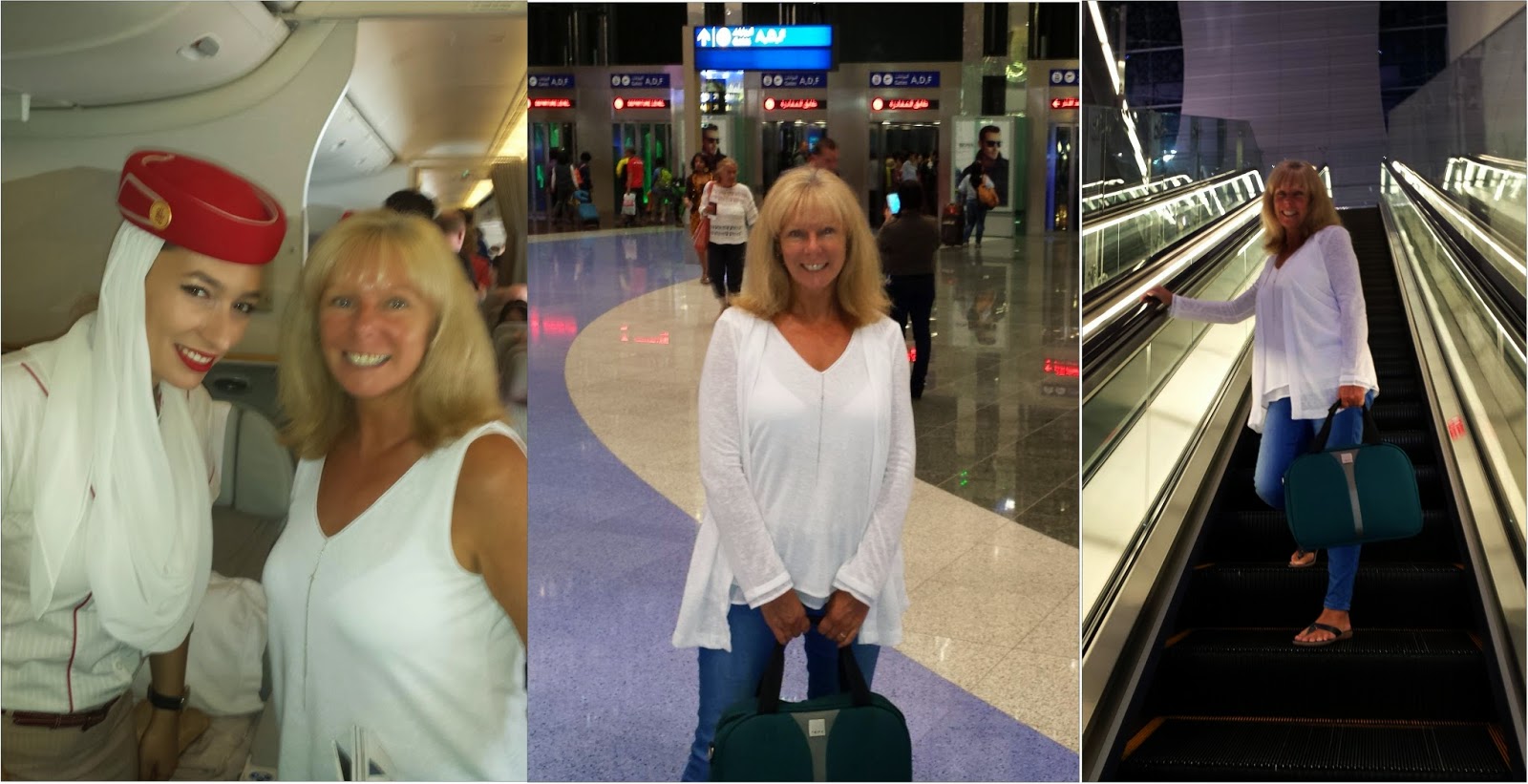 Flying with Emirate Airlines and at the Emirates Terminal in Dubai

Eight and a half hours after boarding our second flight we landed in South Korea and made our way to the train station for an hour long journey to Seoul. From Seoul we took the KTX bullet train onto our final destination. It took two and a half hours traveling at over 300 kilometers an hour (185 miles per hour!) to get to Daegu. When we arrived it was night (eight hours ahead of BST) and we had been traveling for so long without sleep we were exhausted. However, seeing our lovely tall and handsome son walking towards us at the station immediately revived us. And yes, dear reader, as you can imagine - there were lots of tears! 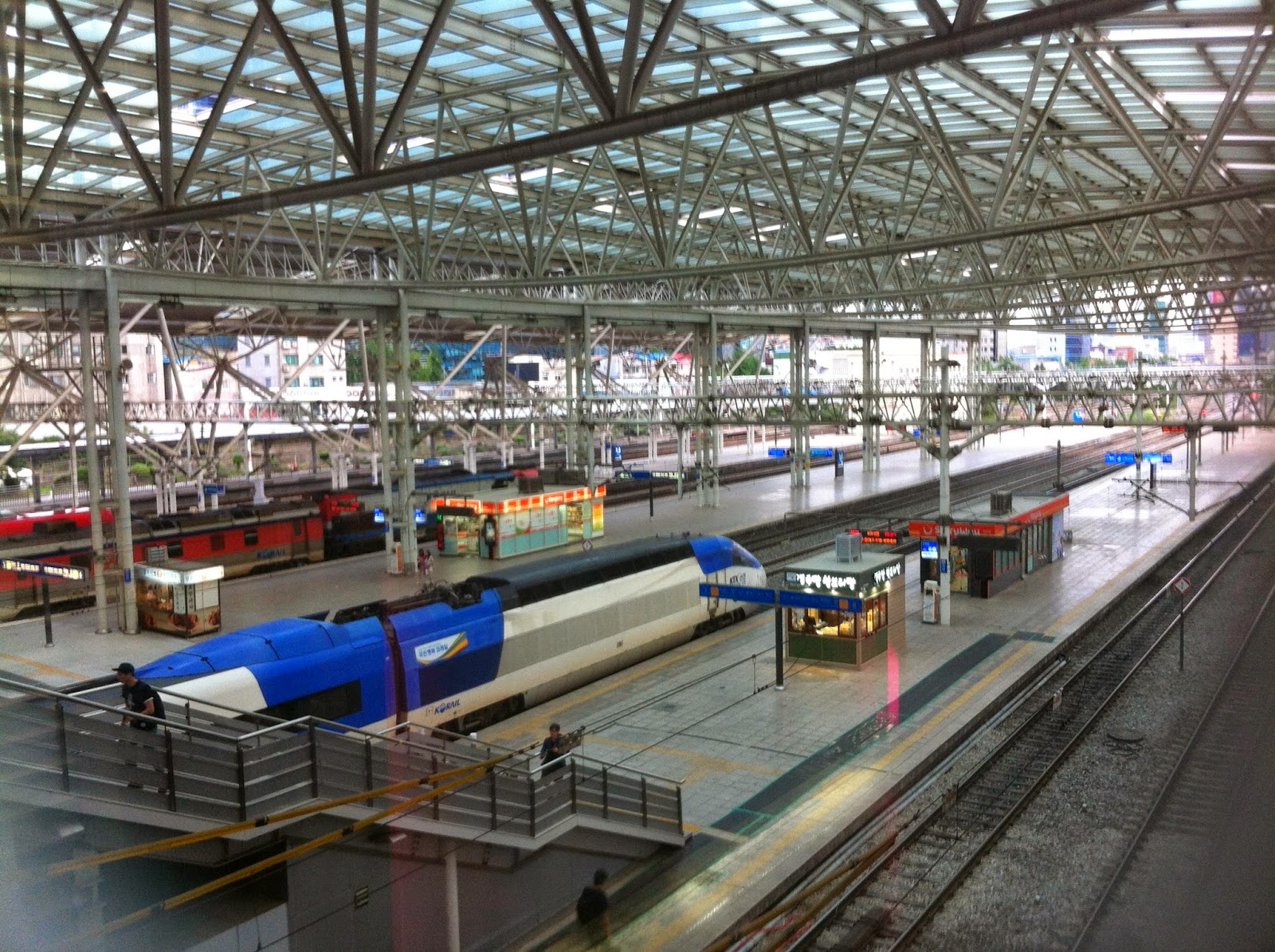 James took us to the brightly neon-lit downtown area to our hotel where we dumped our bags so we could go straight out to dinner. We ate traditional Korean barbeque. At the restaurant all the tables had a brazier in the centre of the table and a ‘chimney’ above it to take away smoke and steam. Marinated uncooked meat was brought to us to cook ourselves and this was accompanied by a kind of soup, rice, shredded vegetables and ‘kimchi’ - the national dish comprising of chilli spices and various fermented vegetables, usually cabbage. Kimchi is a side dish that is reputed to be one of the healthiest foods in the world. I absolutely loved it but drew the line at eating it for breakfast!

Over the next two days we had a fabulous time meeting all of James’s co-workers and friends, exploring downtown, dining Korean style and drinking ‘Soju’ - a deliciously smooth vodka-like, rice distilled drink. Another delight (and an experience exclusive to the city of Daegu) are the ‘bag cocktails’ sold by street vendors that enable you to sip your favourite tipple between visiting bars! 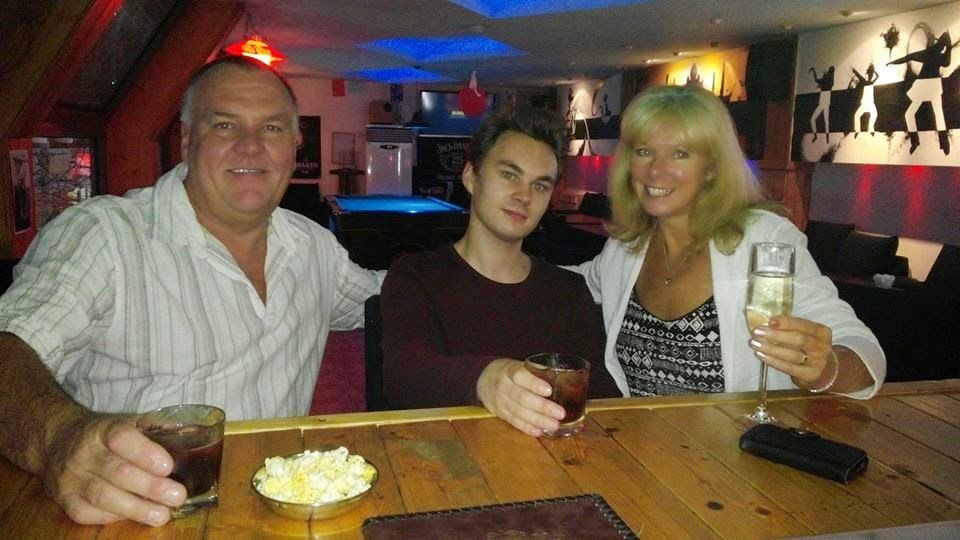 Trav, James and I at the Bombay Lounge Bar

Daegu by day - taken from our hotel room window
Trav and I out and about in downtown Daegu by night
Thomas, Myself and James sipping our 'bag cocktails'

The weekend soon came around (James was working during the week but had the weekend off) and we had planned a trip on the KTX train to Busan, a city on the coast renowned for it’s beaches and its cultural sights. But when Saturday came, James wasn’t feeling well. He’d had a cold the previous week, which he’d caught from one of the children in his class. It had settled on his chest and he was feeling rather breathless. As he is an asthmatic, this is something he treats with his inhaler. James was doing his best not to create a fuss but we decided to do Busan the next day and to go and see the new Tom Cruise movie ‘The Edge of Tomorrow’ instead at the nearby 4DX cinema complex. The film was fabulous but the 4D aspect really made it something of an experience. 4DX movie goers wear the 3D specs but sit in moving seats and get sprayed, misted, vibrated and poked – all in sync with the on-screen action. Popcorn not recommended!

However, when we came out of the cinema, it was obvious that James’s asthma was getting much worse. We argued that he should go straight to hospital. We flagged a taxi and went to the emergency hospital close by where, thank goodness, he was immediately treated. I simply cannot praise the doctors and nurses highly enough. Despite the language barrier, they recognised what was happening and that James was in an asthmatic state. Within seconds of arriving they had him on oxygen, a nebuliser, several intravenous drips and a heart monitor. I can’t tell you how relieved we were to see him slowly getting some colour back to his face. Once stable, James managed to text his Korean speaking friend and co-worker who could help us with communication. He came over straight away as did James's lovely Korean girlfriend, Crystal. James’s headmaster at the school where he works was in contact on the phone, helping with translations and speaking with the doctors. Everyone rallied around to help. If this experience has taught me anything, it is that our lovely son is in good hands. He is living in an amazing country and he not only has a fabulous lifestyle - he has the love and support of a wonderful close network of friends. James was kept in hospital overnight and is now on an array of medicines to help him recover from his ordeal. To prevent his asthma ever getting out of control again, he has been prescribed preventative medication.

The morning afterwards, James was back in the classroom teaching. We went with him to school to meet all his co-workers and some of his pupils. I took these photos. Later the same day, James was told that he had been awarded Best Teacher for the month across all the branches of his teaching academy. James, we are so very proud of you!

Teacher James in his classroom.  Rules for the end of class.  Best of Best!

During the weekend of worry about James, I was also in a bit of distress myself with a terrible toothache. I’d had a bit of pain on and off for a while and so had been for a dental check up before we traveled. I’d even had an x-ray to make sure nothing unseen was going on. My dentist assured me that I merely had a sensitive tooth. Well, that simply can’t have been the case (he is now my ex-dentist) as I had to find an emergency dentist the day before we flew home. At The Happy Dentist (translation) I had full root canal treatment on a molar, the tooth cut down and the nerves removed. If I ever need any radical dental treatment again I will certainly want to go back to Korea to have it done. They are so friendly, fast, efficient and professional. 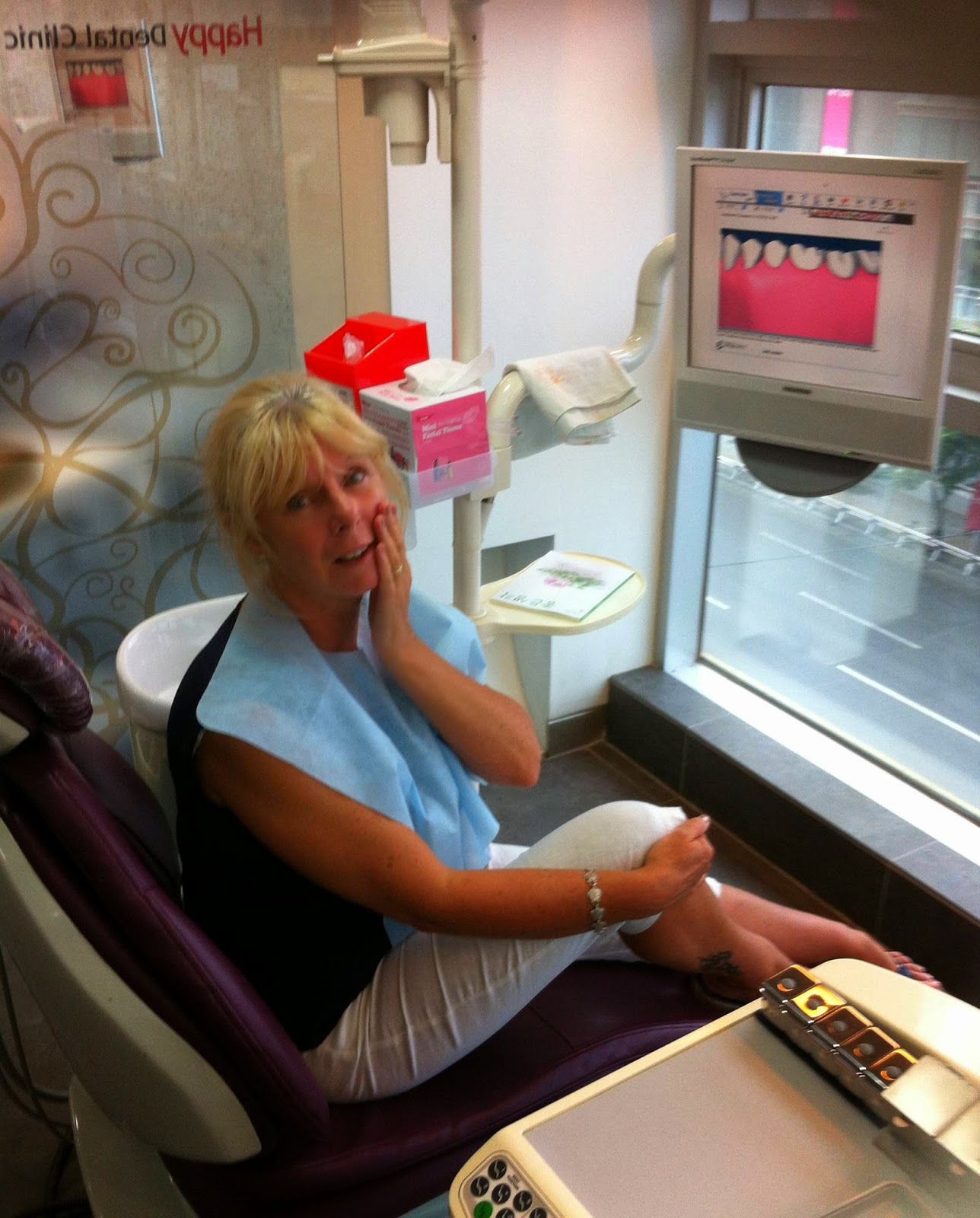 At the Happy Dentist!

I have to admit that when we finally parted with James, I was once again in tears but he was quick to remind us that he’s not the only one to leave home for another country - which is true - as Trav and I are planning to spend the next three months as far away from Korea as we possibly could be – in the Caribbean!

Our journey back to Scotland was long, tiring and uneventful. Despite an initial delay taking off at Incheon due to a thunder storm, we managed to connect with our flight in Dubai. Touching down in Glasgow, I put my watch back eight hours and saw that we were being welcomed home with a dry, warm and sunny day.

Now that we have made the journey to visit our son in South Korea, it doesn’t seem to be as far away as it once did. Plus the fantastic communication links we now have such as Facetime and Facebook and Instant Messaging all helps to make the world seem a smaller place. 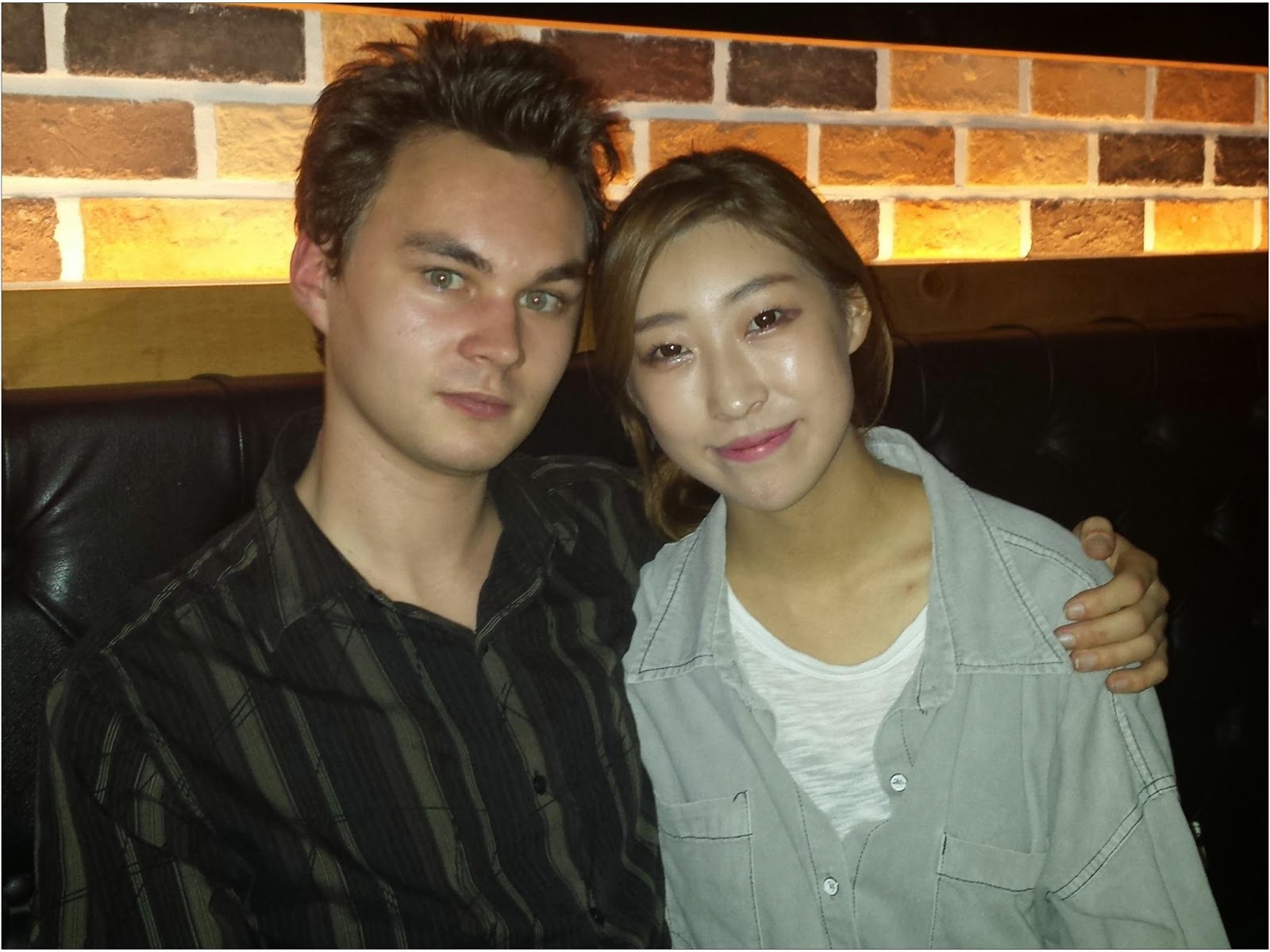 James and his lovely girlfriend Crystal

Once over our jetlag, Trav and I will be packing for our next snap gap. In previous posts I’ve been teasing you by only giving hints as to where exactly we are going. Now I’m ready to tell you that our snap gap during July, August and September this year takes us to the very special island of Utila.

Where is Utila you may ask…? Well, Utila is the smaller of what is known as The Bay Islands off the coast of Honduras. It is located on the mesoamerica coral reef – reputedly the second best coral reef in the world after the Great Barrier Reef off Australia. It is a truly unique island destination and a scuba divers paradise. It is also a hub for whale shark viewing, which as a diver, is what most appeals to Trav. It appeals to me because it is said to be ‘the Caribbean as it used to be’. It has a quaint central town that is said to be ‘the Key West of twenty years ago’ and I like the sound of all that laid back unspoilt charm. You can find out more about Utila at: http://utilaguide.com/

Trav and I have rented a beach apartment and from there he will go out diving each day while I write. I’m told we will have an internet connection. I currently have three works-in-progress on the go - two full length fiction novels and a non fiction travel guide. The first of my works-in-progress is planned for release in November this year and is a romantic adventure novel set in the Caribbean. Where better to be inspired than on a tiny and remote Caribbean island..? 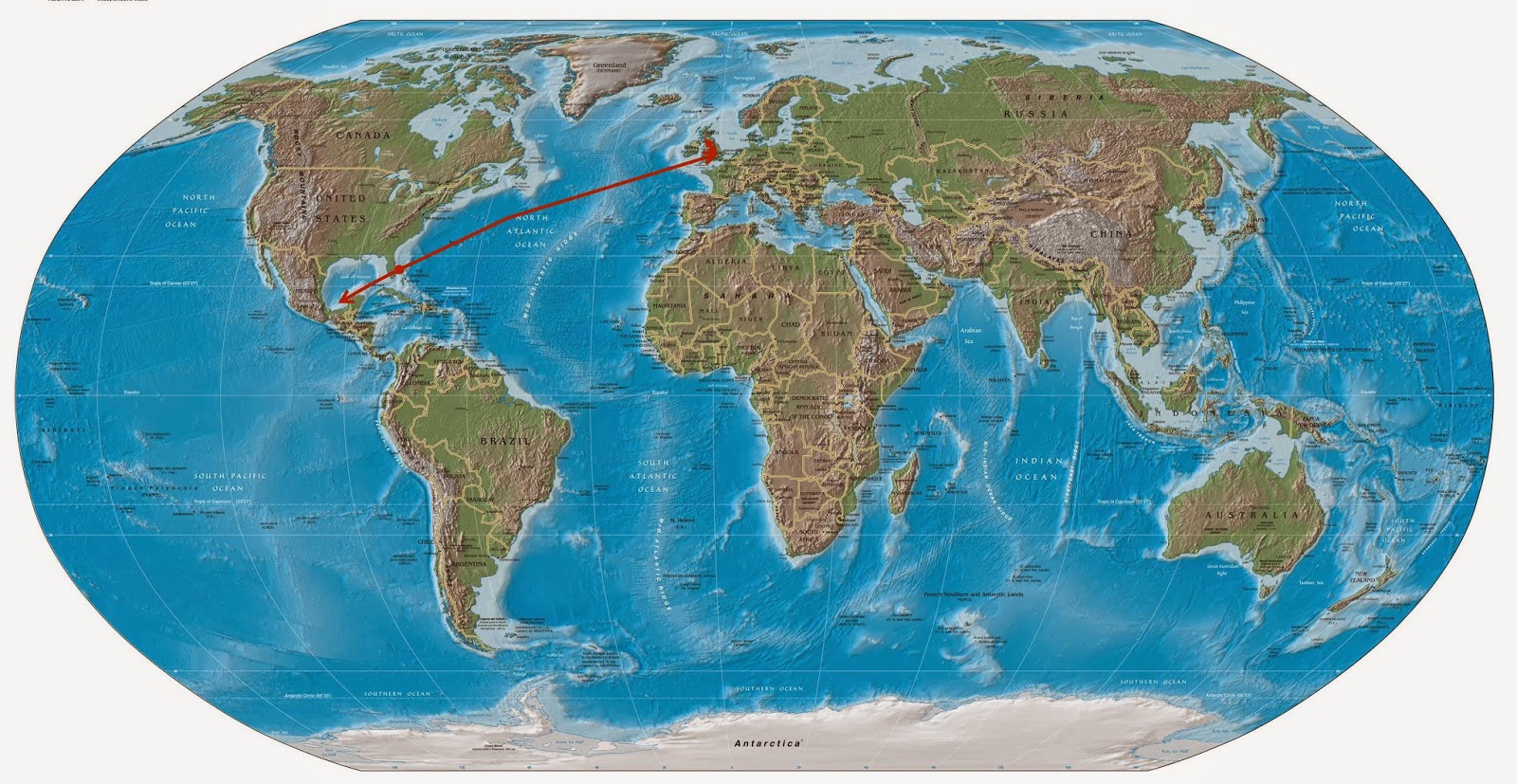 So next time here on the blog I’ll be chatting about and sharing with you all the planning of our next exciting snap gap adventure. I’ll be wondering what is best to pack for an extended trip. (as Trav’s bag will no doubt be full of diving gear!) and I’ll be charting our journey that will once again begin at Glasgow. From there we will fly to London and then onto Miami. From Miami we will fly to San Pedro Sula in Honduras, where we will stay overnight until we can catch a small plane over to Utila the next day, arriving on the 4th July!