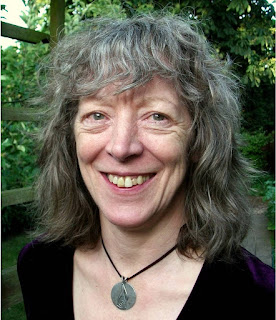 I’m delighted to introduce you to Sue Johnson, a wonderful and talented writer whom I’m known for several years through the Romantic Novelist’s Association and now as Associates at the innovative reader/writer website Loveahappyending.
Sue was born in and has had a variety of jobs during her working life including training administrator, vicar’s secretary, cinema usherette and running her own patchwork quilt-making business. She is now a writer, artist and musician and most of her work is inspired by the stunning Worcestershire countryside where she currently lives. She is a Writers’ News Home Study Tutor and also runs her own brand of writing courses.
Her short stories have appeared in Woman, My Weekly, Woman’s Weekly, Chat: it’s fate, Take a Break, The People’s Friend and That’s Life – . She is published as a poet – including a joint collection with her partner Bob Woodroofe entitled ‘Tales of Trees.’
Sue has produced four booklets and two CDs in her ‘Writer’s Toolkit’ series, designed to help writers of all levels of ability. Her first novel ‘Fable’s Fortune’ was published by Indigo Dreams in August 2011. ‘Creative Alchemy: 12 steps from inspiration to finished novel’ was published by HotHive in October 2011. 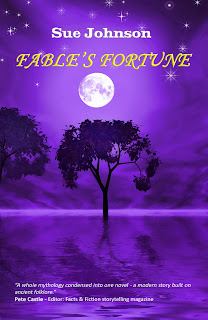 FABLE’S FORTUNE is a modern romance built on a fairytale structure. The back cover blurb reads: Fable Mitchell is born under a roof of stars in a Kentish plum orchard, and her early childhood is spent in a house called ‘Starlight’ where she lives with her mother Jasmine and Gangan the Wise Woman. However, her life is not destined to remain like a fairytale. When she is ten, she is abducted by her estranged father Derek, now a vicar, and taken to live in his austere vicarage at Isbourne on the banks of the River . Fable is unable to escape. When she is sixteen, she falls in love with Tobias Latimer but he dies in mysterious circumstances and Fable’s happiness is once again snatched away from her. She tries to rebuild her life and marries Tony Lucas because she thinks the omens are right. Fable soon realises he is abusive and controlling, but is trapped because she fears losing contact with her daughter. Nearing her 40th birthday, Fable hears Gangan the Wise Woman’s voice telling her to ‘be ready’ – magic happens.’ That is certainly true, but does Fable have the necessary courage to finally seize her chance of lasting happiness?
The story (originally called ‘Star Dragon’) began life in 1998 following my own marriage break-up and divorce. I didn’t do any planning and completed 85,000 words in less than two months. It was extremely therapeutic and helped me get through a stressful time without needing tranquillisers or taking to drink!
Having finished what was a very scrappy first draft (I didn’t really know what I was doing!) I put it on one side for several years while I went back to University to do a creative writing course. During that time, I wrote a lot of poetry and short stories – many of which were published in women’s magazines. I was taken on by the agency Midland Exposure who sold short fiction to women’s magazines.
When I eventually went back to the novel (in about 2002) my ideas about the story and characters had moved on. The story had never left me in all the time I’d been away from it – bits kept playing like a film inside my head. Helped by a severe attack of vertigo, I reworked the story (now called ‘Cloak of Stars.’)
By 2005, having written three more novels and failed to find a publisher, I joined the Romantic Novelists’ Association New Writers’ Scheme. I submitted ‘Cloak of Stars’ for a critique and was advised to take out the fairytale element.
I felt a bit despondent – but decided to have one more re-write. It was at that stage that my heroine, originally called Rose, decided that she didn’t like her name! I searched through all the children’s name books I could find + various internet sites, but found nothing.
In the end, I put my jacket on and walked into town, deciding to stop for a coffee at the first café I came to and the first woman’s name I heard would be the one I went for. Two women wearing fur coats and carrying wicker baskets came in. As they took their coats off one of them said: “Of course, my daughter Fable…” I paid my bill and hurried back to my computer.
One thing I learned in the process of writing this book was that I needed to be persistent and ignore the negative things some people said. I wish I’d concentrated on finding a publisher rather than wasting time trying to get an agent – especially after one admitted, when I contacted her after a long time of being fobbed off by her assistant, that she’d ‘buried my manuscript under a pile of other stuff and forgotten about it.’ The first publisher that I sent the manuscript to after that episode was Ronnie Goodyer Indigo Dreams Publishing – and he said yes! He now has the complete manuscript of my second novel and I’m keeping everything crossed.
My advice to new writers is:
1.         Write every day even if you only manage five minutes.
2.         Get as much work in circulation as possible.
3.         Create a writing C.V. – a publisher or agent may ask for one.
4.         Reward yourself for the effort you put in.
5.         Don’t stop until you achieve your writing ambitions.
‘Fable’s Fortune’ by Sue Johnson is published by Indigo Dreams Publishing (www.indigodreamsbookshop.com) 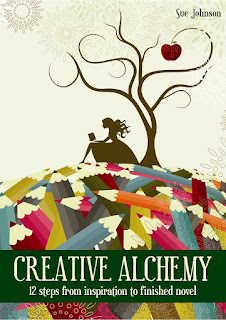 Copies of ‘Creative Alchemy: 12 steps from inspiration to finished novel’ published by HotHive Books are available direct from Sue as the publishers have gone into liquidation. Look out for special offers on www.writers-toolkit.co.uk/blog
Links: Sue Johnson
www.writers-toolkit.co.uk
www.indigodreamsbookshop.com
Posted by Janice at 00:10

Hi Sue Johnson! Thank you for sharing your writerly journey here at Janice's blog. I'm so glad you kept true to your instincts and kept the fairytale element of your novel. It sounds absolutely magical with it! As someone who felt her life started at 40 two years ago - I can only imagine what amazing magic Fable will unlock for her life!!! Take care
x

Hello Sue, a thought provoking post and now I know how Fable got her name. Wishing you continued success. And I just love the cover too!

It's wonderful when someone takes a bad experience/time in their life and manages to find something so productive to take their mind off their problems! Then to go on and share that with others - well it beats drink or drugs that's for sure!

Great interview and I love Fable's name! That was very good advice, Sue, especially getting as much work in circulation.

That was a lovely interview and I liked the sond of the book. Liked the title - unusual - and I loved the cover, it really stands out.

So good to read about persistence paying off! A very cheering interview.

Oh, this looks like a great read. Best of luck, Sue!