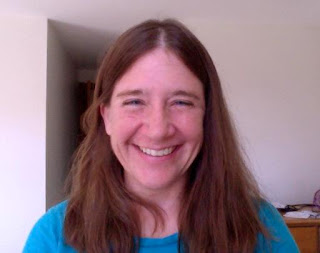 Nancy Volkers is an American writer and when I heard she was on tour promoting her new book ‘Scotland by Starlight’ I jumped at the chance to ask Nancy a few questions about her life, her writing, and why from so many thousands of miles away, she chooses to set her novels in Scotland?
Tell us a little about yourself Nancy and about your life as an author.
I’m a 40-something mom of two who grew up in in a very small town. I started writing stories when I was about five years old. In addition to novels and short stories, I’ve written nonfiction articles, poems and plays, and am working on a screenplay. I have degrees in biology and communications, and in “real life” I write and edit medical information and manage websites. Besides writing, I like reading, running, kayaking, skiing, hiking, multiple crafty pursuits (quilting, sewing, knitting), and am starting to get into cooking. I don’t like tomatoes, hot weather, littering, closed-mindedness or dusting.
A Scottish Ferry Tale was the first novel I completed. I had some external pressure from joining National Novel Writing Month, a contest that takes place each November. I wrote much of Ferry Tale during November 2008. I had absolutely NO time to do such a thing – my kids were 6 and 3 years old, and I was working a full-time job, a part-time job and doing all the other things you do to get through daily life. And yet I found the time… which reinforces the idea that time is relative. If you want to do something badly enough, you’ll find the time to do it!
As an American writer what has inspired you to set your novels in ?
I wanted to send Cassie on a journey to a new place, both literally and figuratively. Travel forces you to see things differently, and she was at a place in her life where she needed that. I chose because I’d been there before, and it seemed like the kind of place where magical things happen.
How do you research and how much time do you put into researching your novels?
I put a lot of time into researching – the theatre, itself, the language, the people and the customs. I wanted my novels to be factually correct as much as possible – Coll is an actual island, for example, and it really is 13 miles long, and there really are standing stones there. The food that’s discussed in the novels is legitimate Scottish food. And the legend that Ralph recounts about the dog-sized cats that may or may not roam the Isle of Mull is also based on an ancient Scottish legend.
For the most part I used the Internet to research, but I did pick up a few books on Scottish clans and customs. The clan names and mottoes at the beginning of each chapter in Scotland by Starlight are factual, to the best of my knowledge anyway!
Tell us about your new novel - Scotland by Starlight.
Scotland by Starlight is a sequel to A Scottish Ferry Tale… and it does help to have read the first novel, although you don’t necessarily need to. Scotland by Starlight is an account of Cassie and Ralph’s lives after Cassie makes the decision to move to . I read a review that said “a lot of things happened in this novel, but nothing really happened” – that made me laugh. That’s sort of what I was going for. There are no huge conflicts resolved, and no character goes through major changes. The book is more of a window into Cassie and Ralph’s lives, as well as the lives of Leslie, Rose, Jamie, Saoirse, and other characters introduced in A Scottish Ferry Tale. I had great fun writing Scotland by Starlight and I think it’s a “chunkier” book with more going on, whereas Ferry Tale is more straight-up romance, focusing almost exclusively on Cassie and Ralph.
The epilogue to Scotland by Starlight upset quite a few people. But I can’t apologize for it. I sat down one day and began writing in Ralph’s voice, and went with what he was saying. To me, the epilogue is a bittersweet reminder to live in the moment, appreciate what you have when you have it. Don’t procrastinate when it comes to joy!
Links:
Visit Nancy’s website!
Visit Nancy’s GoodReads page!
Follow Nancy on Twitter! 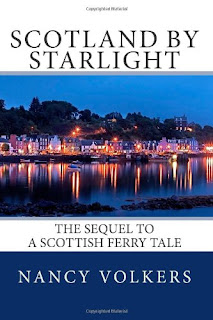 Next week I’ll be back from my writerly retreat and I’ll be chatting about the process of starting a new novel – facing that blank page and either following a carefully constructed plan or flying by the seat of your pants. As I’m a pantser myself I’ll let you know exactly how I got on. See you next Friday!
Janice xx
Posted by Janice at 12:10

Thanks for being a part of Nancy's tour!

Nancy's books sound intruiging. I, too, set my work in Scotland yet don't live there - just have family connections, past & present and have been lucky enough to have visited there.

Feeling the need for another trip. Feet need to step on Scottish soil.

I am stopping by from the Top Writing Blog competition.

Just wanted to say hello. This is a great way to find new blogs and visit ones you haven't visited in a while. :)